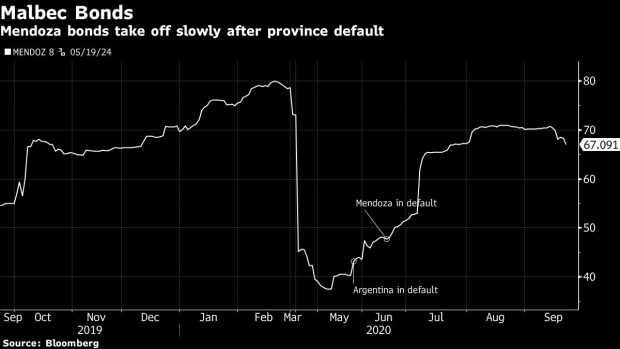 (Bloomberg) -- Argentina’s Mendoza province has reached an agreement in principle with its major creditor group, making it the first of a handful of provinces to reach a debt deal after the government restructured its overseas debt.

The province and its main institutional investors reached the deal after revising the terms of the offer, which has now been extended until Sept. 29, according to a statement. Mendoza had sought to push forward payments on $500 million of bonds due 2024 and defaulted in June.

More than half a dozen provinces, including the country’s largest, Buenos Aires, have been in talks with creditors to delay their own payments. Analysts expect those deals will be more generous than the one by the national government, which ended at about 55 cents on the dollar.

The deal represents a net present value of 72.7 cents on the dollar assuming a 12% exit yield, Economy Minister Lisandro Nieri said in a webcast press conference. The step-up coupon will now be 5% on average, down from about 8.4% before the deal. That represents a haircut of 40% on the coupons, Nieri added.

“The agreement is very important to the province, since it’s the largest component of our debt,” Nieri said at the press conference. The province will now move on to restructuring its local debt. “We believe this is very good news.”

The agreement of the Mendoza ad hoc committee in the deal means the province has over 90% acceptance, way beyond the minimum participation thresholds of 75% required by the bonds’ collective action clauses, Nieri added. The group is made up of three institutional investors.

The revised terms include that principal amortizations will begin March 2023 and end in March 2029. Principal and interest payments will also be earlier in the calendar year, with payments in March and September instead of May and November. That move mirrors a similar strategy by the national government that was key to unlocking the talks.

Mendoza, famed for its exports of Malbec wine, had set Sept. 25 as the deadline for its negotiations. By July 31, the province had tendered about 60% of the bonds, according to a statement from that month. The province’s bonds due 2024 traded at 67.09 cent on the dollar on Tuesday at 3:48 p.m. in Buenos Aires.

Bloomberg News reported earlier that a resolution would be announced Tuesday.

(Updates with province statement throughout.)