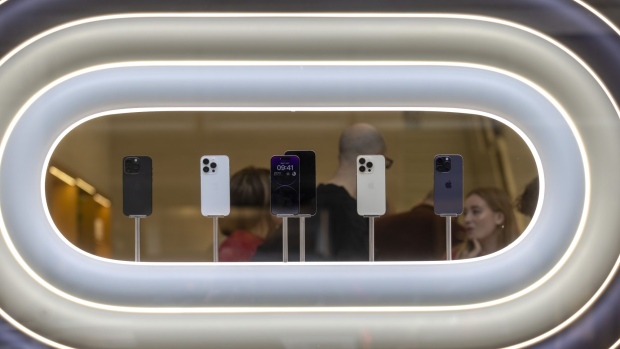 A display of iPhone 14 Pro smartphones at the Apple Inc. Regent Street store in London, UK, on Monday, Nov. 7, 2022. Apple expects to produce at least 3 million fewer iPhone 14 handsets than originally anticipated this year, according to people familiar with its plans. , Bloomberg

(Bloomberg) -- Latin American e-commerce and fintech firm MercadoLibre Inc. has filed a complaint with antitrust regulators in its largest markets of Brazil and Mexico against Apple Inc., claiming that the US tech firm has broken anticompetitive practices.

MercadoLibre alleges that Apple is violating anti-competitive practices by prohibiting third-parties from distributing digital goods on iOS apps, Head of Antitrust Paolo Benedetti said in an interview. In addition to hurting developers, that policy also leads to higher prices due to the large commissions that Apple charges, he said.

The Buenos Aires-based company has submitted a complaint that claims that Apple limits the emergence of distributors of digital goods and services and restricts the distribution of content within its platforms. It adds that the company forces developers to use Apple’s payment processor, which leads to an “undue increase in costs” and limits companies’ distribution channels.

The Apple press office did not immediately reply to an emailed request for comment.

The complaint adds to a series of antitrust cases around the world. Apple usually requires developers to use its own payment system, which helps it ensure a commission for apps on its platform. That tight control over app payments has attracted lawsuits and antitrust scrutiny, often focusing on Apple’s refusal to allow developers to steer users to other payment methods.

“We’re going a step further from what other agencies had said by questioning Apple’s monopoly to distribute third-party digital content,” Benedetti said. “We’re a marketplace for physical goods, but we’re also interested in becoming a marketplace for digital goods.”

The Buenos Aires-based company operates in 18 countries across Latin America and has expanded into financial technology in recent years, with fintech revenues becoming the fastest-growing portion of the company. Among the digital services the company could offer without the existing limitations are e-books, video streaming, audio streaming, video games, subscriptions, or even apps, Benedetti said.

For example, MercadoLibre currently offers subscriptions to Disney+ and HBO to Android users in its loyalty program, but it does not currently do so to iOS users.

MercadoLibre shares fell 6.7% in New York trading while Apple’s shares were down 1.2%. That compares with a 2.2% decline for the broader Nasdaq.

In June, the Dutch consumer protection regulator ruled that the tech firm will have to allow alternative payment methods in dating apps. The company, alongside Google’s parent company Alphabet Inc., also faces an in-depth probe from Britain’s antitrust watchdog after a study concluded they have the power to “exercise a stranglehold” over operating systems, app stores and web browsers on mobile devices.

In the US, the company also faces a probe from the Justice Department after Epic, the maker of the popular Fortnite game, asked the Ninth US Circuit Court of Appeals to find that Apple’s online marketplace policies are anticompetitive.

MercadoLibre’s complaint was filed before Mexico’s Federal Telecommunications Institute (IFT) and Federal Economic Competition Commission (COFECE), and Brazil’s Administrative Council for Economic Defense (CADE). The process initiated through these organizations could take about two to two years and a half to be resolved.