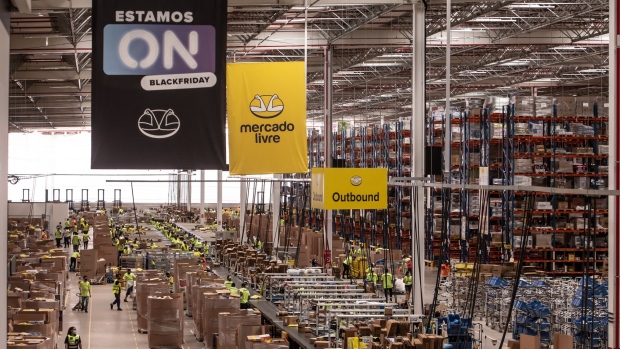 Workers walk through a MercadoLibre Inc. distribution and fulfillment center in Cajamar-SP, Brazil, on Friday, Nov. 27, 2020. MercadoLibre is having another year of strong top-line growth, likely reaching 65% in 2020, after a slow start when the Covid-19 pandemic led to government lockdowns. Photographer: Jonne Roriz/Bloomberg , Bloomberg

(Bloomberg) -- MercadoLibre Inc. is stepping up its foray into the crypto world through its digital payments app.

MercadoPago customers in Brazil will soon be able to buy, sell and hold cryptocurrencies using their digital wallets, as the largest Latin American company by market capitalization looks to expand its lineup of financial products. The possibility became available to a small group of clients earlier in November and will be rolled out more broadly in the coming weeks, according to Tulio Oliveira, a MercadoPago vice president.

“We took the time to study and learn before deciding to step into crypto,” Oliveira said in an interview. “This has a transformational potential ahead and opens up a new avenue for us.”

The idea is to replicate the product in other Latin American markets going forward, according to Oliveira. However, customers, at first, won’t be able to use cryptocurrencies to pay directly for goods purchased on MercadoLibre, he said. The decision follows similar moves by U.S. digital payment groups PayPal Holdings Inc. and Venmo LLC.

MercadoLibre announced last May that its treasury purchased $7.8 million worth of Bitcoin, and Marcos Galperin, its co-founder and chief executive officer, is among those who have been vocal about the potential of opportunities around cryptocurrencies.

“Crypto is going to be a major development,” Galperin said in a Bloomberg interview earlier this year. “People are trying to retain value and some of the cryptocurrencies will retain value by definition because they cannot be printed away or devalued.”

MercadoLibre started its fintech arm in 2003 and has gradually increased its offered services from a wallet and payment method, to also offering credit for buyers and sellers, as well as insurance. Its total payment volume totaled $20.9 billion in the third quarter, up 44% from a year earlier in U.S. dollars.