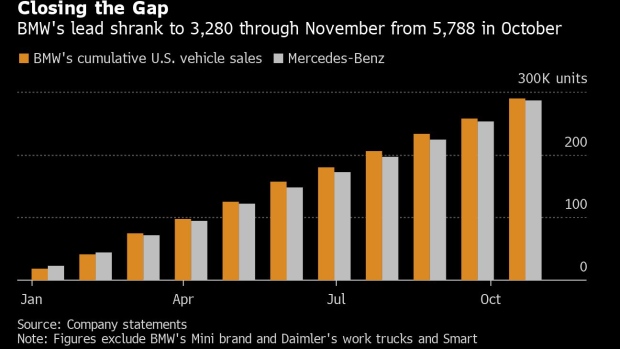 The hood badges for Mercedes-Benz AG automobiles sit on the production line before attachment to vehicles at the Valmet Oyj automotive plant in Uusikaupunki, Finland, on Wednesday, May 25, 2017. The plant is being hailed as a symbol of Finland’s economic comeback after it secured a contract to produce Mercedes’ GLC sports utility vehicle, boosting employment to as much as 3,800 workers -- a record. Photographer: Roni Rekomaa/Bloomberg , Bloomberg

(Bloomberg) -- Mercedes-Benz outsold BMW AG for a second consecutive month in November, making the U.S. sales race between the two German luxury rivals the closest it’s been since March.

BMW posted a 10.2% gain to 31,213 vehicles, its fourth consecutive monthly increase. Its 3-Series sedan led the way, with sales almost doubling to 6,283. The X3 and X5 crossover SUVs also posted big volume gains, as did the larger three-row X7 SUV.

For the year, BMW’s lead over Mercedes narrowed to just 3,280 vehicles through the end of November.

The luxury leaders weren’t the only ones to grow sales at a healthy clip last month. Toyota Motor Corp.’s Lexus brand rose 14% to 30,093 vehicles, aided by demand for its RX and NX SUVs and ES entry-level sedan.

The Audi Q5 SUV paced sales at Volkswagen AG’s upscale Audi brand, which saw volumes grow 21% in the month. That spurt to 20,618 vehicles reflects weakness this time last year when Audi’s U.S. operations were hurt by a vehicle shortage.

To contact the editors responsible for this story: Chester Dawson at cdawson54@bloomberg.net, Melinda Grenier