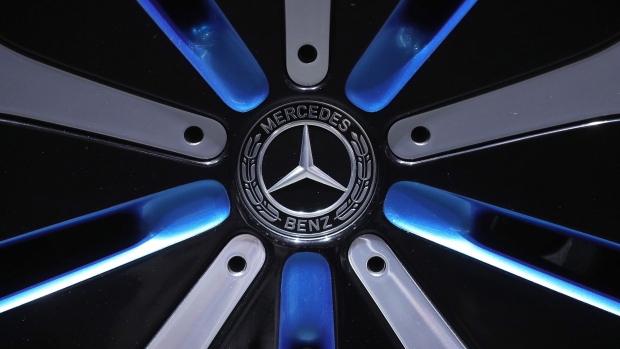 A Mercedes-Benz badge sits on the wheel hub of a Mercedes EQC concept electric automobile at the Daimler AG annual general meeting in Berlin, Germany, on Wednesday, May 22, 2019. Departing Daimler Chief Executive Officer Dieter Zetsche promised cost cuts and an efficiency drive to restore profit margins as the man who steered the Mercedes-Benz carmaker for more than a decade leaves his successor to tackle unprecedented industry upheaval. Photographer: Krisztian Bocsi/Bloomberg , Bloomberg

(Bloomberg) -- Mercedes-Benz Group AG has committed to manufacturing electric vehicles in Thailand after signing an agreement to import its battery-powered cars — part of a government plan to bolster the Southeast Asian nation’s status as a clean automaking hub.

The luxury carmaker will receive a slew of benefits including lower import duties and excise taxes for each fully electric car brought into the country by its Thai unit through 2023, Ekniti Nitithanprapas, director general of Thailand’s excise department, said in a statement Friday.

The agreement also binds Mercedes to making electric car models in Thailand, likely at its plant in Samut Prakan province, although Ekniti didn’t say which models that may include or when production may start. Mercedes’ facility there has to date been used to assemble combustion engine cars and it recently started producing EV batteries.

At a local motor show last week, Mercedes displayed a fully electric EQS 500 car, which Roland Folger, chief executive of Mercedes-Benz Thailand, said was “the first local production made outside of Germany.” Folger didn’t elaborate on the model’s production timeline.

Mercedes is the latest global brand to enter Thailand’s electric passenger car market — an arena where new Chinese entrants are challenging legacy Japanese and European automakers. Earlier this week, Tesla Inc. opened bookings for two of its EV models, which should be available by the first quarter of next year.

Chinese automaking giant BYD Co. meanwhile has started selling its first electric SUVs in Thailand and said in September it has signed a land-purchase deal to build its first EV plant in Southeast Asia.

Thailand has a comprehensive automotive supply chain that feeds scores of factories owned by many of the world’s largest carmakers including Toyota Motor Corp., Ford Motor Co., and Honda Motor Co. The government has said it wants 30% of car sales to be electric by 2030 and earlier this year allocated about 43 billion baht ($1.2 billion) through 2025 to achieving that goal.

The government has paid out 81 million baht in subsidies for the around 540 electric cars purchased in Thailand so far, according to Ekniti.