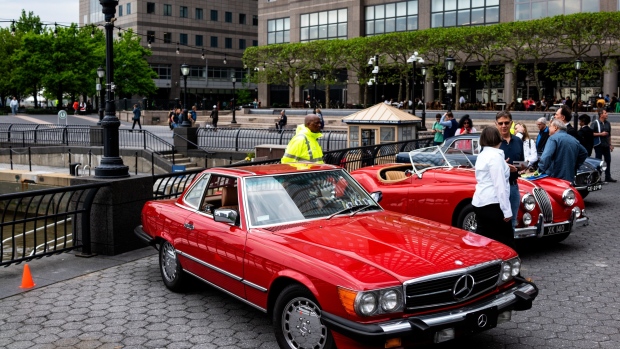 Mercedes-Benz has announced a new version of its most widely recognized car: The SL convertible.

Descended from the galloping 300 SL Gullwing racers that were the first modern supercars, and which now command millions at auction, the original mass-production SLs gained prominence in popular culture in the 1980s and ‘90s, appearing in films like Bridget Jones’s Diary and Casino, to TV shows like Hart to Hart.

The SLs of that era were defined by their short wheelbases, prominent hoods and flat trunks, removable hardtops, their four friendly round headlights and rectangular taillights. Their interiors were elegantly simple and comfortable to use for daily driving; their trunks proved large enough for carting weekday groceries and weekend luggage. Performance across multiple V6 and V8 engine variants hovered around 200 horsepower—which was enough for enjoyable driving given the car’s apt moniker: “SL” derives from the German term Sport-Leicht, or “sport-light” in English. Their stylish bodies weighed well under 4,000 pounds, 1,000 pounds less than other Mercedes convertibles today.

Affordable and reliable vintage cars, classic SLs inhabit trendy neighborhoods from Silverlake to Fort Greene with their cherry reds, snow whites, champagne golds and Navy blues dotting hipster driveways and coffee shop store fronts. Driving examples can be had from any local dealer for less than US$25,000.

But those old cars are things of the past. With its curvaceous edges, high shoulder line, longer body (by nearly 20 inches), prominent air intakes, and a starting price sure to be at least double that of the vintage models—exact pricing will be announced next year—the seventh-generation 2022 SL will skew to considerably different customer than the early models.

“The SL had a very established clientele, but with that new model I think we will acquire a lot of new customers,” Daimler AG’s Chief Design Officer Gorden Wagener said on a conference call with reporters Oct. 19. “We expect it will be younger customers than those who bought the previous SLs before, because the car is young and fresh.”

The new SL family will also stay in keeping with Mercedes' recently stated goal to spend more than US$46 billion by 2030 to electrify its product range. During the Oct. 19 call, Phillipp Schiemer, the CEO of Mercedes-AMG, said the brand will also launch a performance hybrid version of the SL at a later, unspecified, date.

The SL has an active rear spoiler that has six settings, depending on the speed of the car and driver preference; anti-roll stabilization; and a host of crash-avoidance systems. It comes with a fully digital instrument cluster integrated into a three-dimensional anti-glare screen. The center console comes with an adjustable touchscreen and displays that marks it as distinct from other Mercedes models.

For the first time in its almost 70-year history, the SL will have all-wheel drive, standard rear-axel steering, and a high-performance ceramic brake system all tied together by a completely new lightweight composite aluminum chassis. Active hydraulic elements replace the conventional mechanical anti-roll bars and compensate for rolling movements of the new SL; this enhances ride comfort when driving straight ahead and when negotiating bumps. A soft fabric roof on both deploys in 15 seconds at speeds up to 37 mph; the modern SL will not offer a folding hard-top version like the SLs had in the 1990s and early 2000s.

Company executives were quick to note that not one component on the new SL comes from the predecessor SL or any other similar model like the AMG GT Roadster. Said Wagener: “It was time for a restart.”