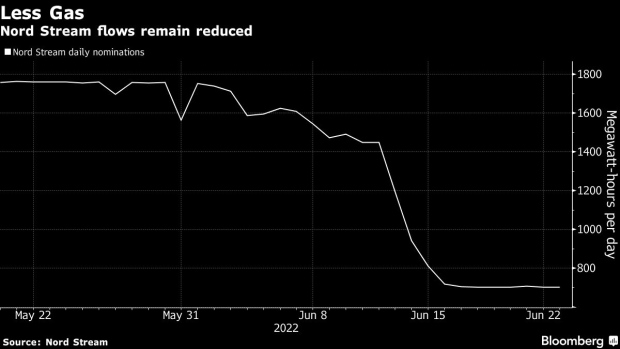 Signage on the exterior of a Mercedes-Benz AG showroom in Berlin, Germany, on Tuesday, Feb. 24, 2022. Mercedes-Benz expects profitability at its main cars division to slip this year as the German manufacturer sees more drag from supply-chain snarls and a surge in raw-material costs. , Bloomberg

(Bloomberg) -- Mercedes-Benz AG will consider selling natural gas back to Germany’s grid if efforts to reduce use of the fuel leave it with excess supply as the country braces for a further deterioration in energy flows this winter.

Mercedes sees potential to save more gas over the coming months, production chief Joerg Burzer said Wednesday. Germany plans to encourage industry and energy providers to save gas by offering incentives for them to make surpluses available to the market.

Putin Is Pushing Germany’s Economy to the Breaking Point

“We don’t know what’s going to happen, but we’re making sure we’re well prepared for it,” Burzer said in a virtual press roundtable on Wednesday. “If there were some spare gas, then it’s something we could look at.”

Germany is racing to save gas after Russia cut supplies on the key Nord Stream pipeline by more than half this month. The country aims to have storage sites 90% full by November from about 58% now, and lower flows from Russia will make it difficult for Germany to achieve its targets.

Among other things, Mercedes uses natural gas in its car paint shops and in foundries that create metal components for use in gearboxes and other applications.

Germany Unveils Incentive Plan for Industry to Reduce Gas Use

Under a reverse auction system to begin this summer, major German consumers and suppliers will offer their unused gas, with winning bidders getting paid for the fuel they provide, the Economy Ministry said in a statement last week. The measure was detailed as Germany elevated the risk level in its national gas emergency plan to the second-highest “alarm” phase.

Under the auction mechanism, companies will post their offers at Trading Hub Europe, Germany’s gas-market manager. When supply bottlenecks occur, the hub will take up the cheapest offer. Payments to industrial companies will be based “purely on the energy price,” Germany’s network agency said.