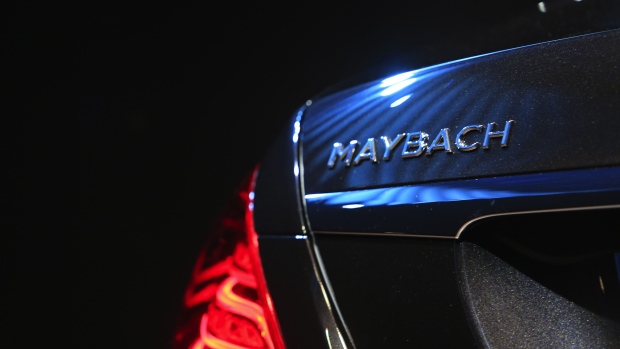 The Maybach logo is seen on the rear of an auto-show display model. , Bloomberg

Daimler AG unveiled the latest version of its US$200,000 Mercedes-Maybach S-Class sedan, a highly profitable car the manufacturer hopes can help shore up margins amid an accelerating shift toward electric vehicles.

Sales of the top-version S-Class, which is particularly popular in China, will start before the end of the year in some markets, Daimler said Thursday in a statement. Shipments in its home market Germany will begin next spring.

A stronger focus on large luxury vehicles like the S-Class or the boxy G-Class is a key part of Chief Executive Officer Ola Kallenius’s strategy to improve profits and finance a restructuring that includes boosting Mercedes’s lineup of battery-powered cars. While competition has intensified across the industry, the S-Class has consistently outsold rivals including BMW’s 7-series or Audi’s A8.

The #MercedesMaybach #SClass stands for a new world of beauty and luxury – catch a glimpse of the world premiere of the new #Maybach S-Class on Mercedes me media: https://t.co/4czxCyIJZ0 #MercedesBenz pic.twitter.com/RM5K1Dd2UO

The S-Class, as Daimler’s cash cow, has funded tech investments and would normally bolster margins, but the company’s accelerating sales of unprofitable EVs are expected to curb returns, Bloomberg Intelligence analysts Michael Dean and Gillian Davis said Wednesday in a note. At the same time, because of a lack of battery-electric vehicles in its lineup, Daimler also “fails to narrow the tech gap” with Tesla Inc., they said.

Mercedes will step up efforts to catch up with Tesla next year, when it will flank the S-Class with a fully-electric sibling called EQS. That car will be based on new technology offering driving ranges of as much as 700 kilometers (435 miles).

Kallenius on Thursday reiterated that the company may double output of its exclusive Maybach sub-brand, which includes the GLS SUV, and add an electric model to its lineup. Mercedes sold a record 12,000 Maybach sedans last year, driven largely by strong demand in China.

The Maybach, which is designed for chauffeured trips, often features a characteristic two-tone paint finish and comes with a wheelbase that’s 18 centimeters (7.1 inches) longer than that of the standard S-Class. Buyers can pick gadgets including calf rests with a massage function, silver-plated champagne goblets and automated rear doors.