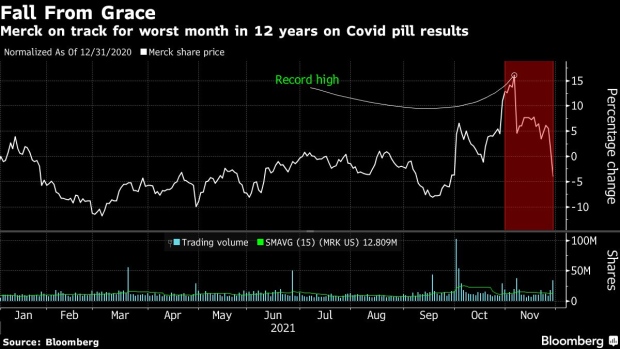 (Bloomberg) -- Merck & Co. is on track for its worst month since the global financial crisis after its Covid pill turned out to be less powerful than initially thought.

The stock is down roughly 15% in November, on track for its worst monthly performance since February 2009, as last week’s updated results on the antiviral medicine, molnupiravir, disappointed investors. Merck and partner Ridgeback Biotherapeutics LP had filed for an emergency use authorization in October.

The U.S. Food and Drug Administration is convening an advisory committee of outside advisers on Tuesday to review the trial results. The question is whether the benefits outweigh the risks of Merck’s pill as an early treatment for mild to moderate Covid in people at risk of developing more severe cases of the disease.

Agency staff raised concerns about the potential links of molnupiravir to birth defects and genetic mutations, as well as the possibility that it could drive resistant strains of the virus, according to documents released on Friday. While the FDA isn’t required to follow the panel’s recommendation, it often does.

On Nov. 4, Merck closed at a record high of $90.54 when the drug, also branded as Lagevrio, received its first authorization from U.K. regulators. But the rally was short-lived as Pfizer Inc. followed with results for its own pill and plans to seek regulatory clearance the following day. Less than four weeks later, Merck’s stock is trading around $74.50.

Analysts have been optimistic about a potential green light for antivirals, though some expect Pfizer’s drug may eventually overtake Merck’s. A Citigroup analyst further fueled Merck’s selloff on Monday, downgrading the stock and saying the drugmaker was likely to stop developing a key new HIV treatment. Merck is down roughly 4.5% this year compared with a 13% gain in the S&P Pharmaceuticals index.