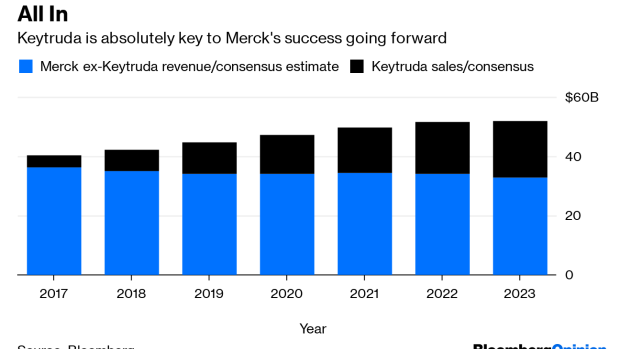 (Bloomberg Opinion) -- Merck & Co. seems to have it in for investment bankers, at least when it comes to potential IPO fees. The drug giant announced Monday that it was buying closely held cancer-treatment developer Tilos Therapeutics for up to $773 million, a few weeks after shelling out $1.05 billion for another oncology startup, Peloton Therapeutics, on the eve of its IPO.

Buying private and relatively early-stage biotech firms has a lot to recommend it. It’s often cheaper because of the risk that still unproven drugs won’t work out, and because going public can inflate valuations for buzzy companies. Both deals add intriguing assets that bolster Merck’s pipeline in a relatively prudent way. They still don’t address Merck’s most significant problem: its over-reliance on the immune-boosting cancer blockbuster Keytruda.

To be sure, Merck’s monomania has paid off so far. The drugmaker is the dominant player in one of the industry’s most important markets. But its position isn’t unassailable. Keytruda has often outperformed rivals but recently failed in trials in liver and gastric cancer patients. With five similar drugs already on the market in the U.S. and more on the way, price pressure and increasing competition are inevitable. Chinese drugmakers are already selling competing medicines at a lower price, and have eyes on the global market.

Peloton is just preparing to start a Phase 3 trial in kidney cancer, and Tilos is at an earlier stage of research, so it will be a while before either acquisition results in medicines that contribute to or diversify Merck’s top line. Merck bought into already marketed cancer drugs Lynparza and Lenvima in earlier deals that add a bit of cash flow. But those collaboration agreements resulted in a split of relatively modest revenues, and the long-term potential of those medicines is in part tied up in uncertain combination trials with Keytruda.

Merck gets a pass for its concentration risk right now because Keytruda’s grasp on the cancer throne looks solid. But it should be thinking about widening its M&A aperture in terms of size, volume, and treatment area now, so it’s ready when its reign is inevitably challenged.