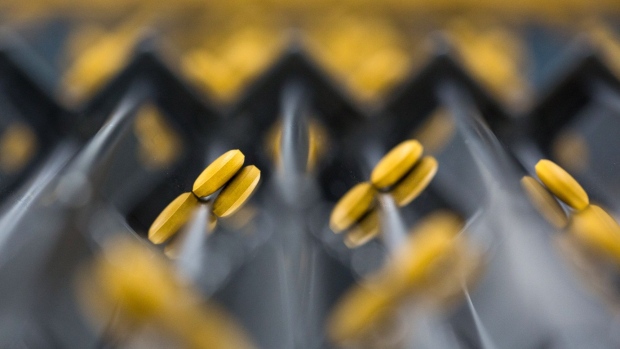 (Bloomberg) -- Merck & Co.’s talks to buy cancer-drug maker Seagen Inc. have stalled for now, threatening what would be the pharmaceutical giant’s biggest deal in more than a decade, according to people familiar with the matter.

The companies have so far failed to agree on a price, said the people, who asked not to be identified because the information was private. The talks could still resume and possibly yield an agreement, the people said. Seagen shares fell 8.6% at 9:32 am. in New York.

A spokesperson for Seagen, previously known as Seattle Genetics, declined to comment. A representative for Merck didn’t immediately respond to a request for comment.

Failing to complete a deal would still leave Merck with a formidable presence in oncology. It already has one of the best-selling cancer treatments in the world, its Keytruda immunotherapy drug, but it’s heavily reliant on that one product.

Seagen is a leader in developing a different type of medicine called antibody-drug conjugates, or ADCs. These precision medicines deliver cancer-killing drugs so potent they might otherwise be too toxic to use. The new delivery mechanism uses antibodies to deposit a strong concentration of drug directly at a tumor site, which may increase efficacy with fewer side effects.

Merck invested in Seagen in 2020 as part of a drug partnership with the biotech firm and has already tested some of Seagen’s drugs in combination with Keytruda.

Shares of Seagen had fallen 3.2% in the past year before Friday, giving the company a market value of about $28 billion.

Seagen attracted interest recently because suitors see an opportunity after the resignation in May of co-founder and CEO Clay Siegall, who had opposed a sale of the company, people familiar with the matter said.

Siegall resigned about a week after the company said it was aware of “an alleged incident of domestic violence that occurred recently” at his home. The executive, who had led the company since 2002, also resigned from the board. Siegall denied the allegations and informed the company he’s going through a divorce.

Chief Medical Officer Roger Dansey is serving as interim CEO while Seagen, based in Bothell, Washington, searches for a permanent replacement for Siegall, according to a May statement.

The company’s collaboration deal with Merck was worth up to $4.5 billion and included developing an experimental breast cancer treatment. One of the Seagen drugs that may have attracted Merck’s interest is Padcev, a bladder cancer treatment that has shown promising results in combination with Keytruda.

Merck’s biggest-ever acquisition was its $47 billion deal for Schering-Plough Corp. completed in 2009, according to data compiled by Bloomberg.