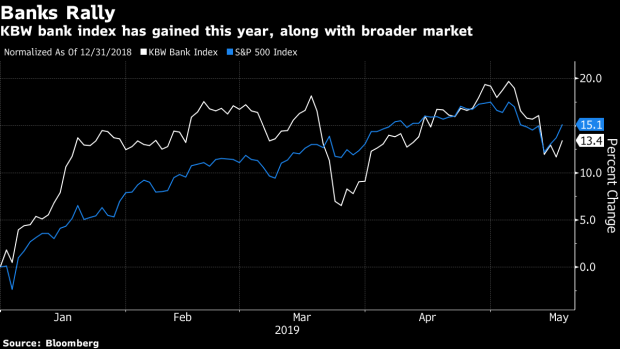 (Bloomberg) -- Banks contemplating deals might want to do them now, in case Democrats critical of bank transactions emerge as winners in the 2020 election, Wells Fargo analyst Mike Mayo said.

“Merge now, if you’re going to do it,” Mayo said in a Thursday interview, as the rules might change if there were to be a different administration.

Mayo pointed to the usual scrutiny of the proposed BB&T Corp.-SunTrust Banks Inc. deal. Ironically, he said that making it harder for regional banks to merge would “be a big favor” for the biggest banks, like Bank of America Corp., deepening the “moats” that protect them.

On Thursday, Maxine Waters, the chairwoman of the House Financial Services Committee, said in a statement at a hearing on financial institutions that “bank consolidation is accelerating as I previously warned it would,” with the BB&T and SunTrust tie-up potentially creating the country’s sixth-largest bank.

“While thousands of banks have proposed to merge between 2006 and 2017, not a single bank merger application was formally rejected by the Federal Reserve,” Waters said. “Bank mergers should not simply be rubber stamped by regulators; they should provide a clear public benefit for the communities the banks serve.” Waters has called for hearings in states that would be affected by the BB&T-SunTrust deal and for regulators to defer a decision until the committee “has an opportunity to thoroughly review the matter.”

On May 9, Cowen said there’s little risk the BB&T/SunTrust transaction won’t close due to concerns outlined by Waters, as nothing requires the Federal Reserve or the FDIC to wait for Congress to complete reviewing a merger before they approve it. Analyst Jaret Seiberg expected Waters would hold at least two hearings on the deal before the August recess, likely including community activists and consumers. He also expected the CEOs of both banks -- Kelly King and Bill Rogers -- may be asked to testify.