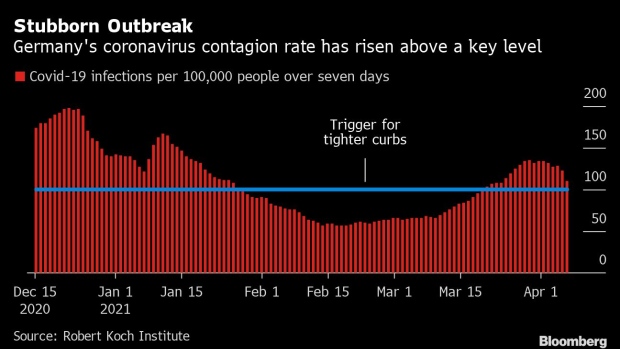 Markus Soeder, Christian Social Union (CSU) leader and Bavaria's premier, wears a protective face mask during a Coronavirus news conference in Munich, Germany, on Wednesday, April 7, 2021. An increasing number of lawmakers from Angela Merkel's party want Soeder to be the conservative bloc's candidate to replace the German chancellor when she steps aside after September’s election, Der Spiegel magazine reported. , Bloomberg

Bavarian Premier Markus Soeder -- a contender to become the CDU-led bloc’s chancellor candidate in September elections -- said on Wednesday that he doesn’t see a majority of state leaders backing the proposal for a hard nationwide lockdown.

“I hope that changes before Monday,” when Merkel and the heads of Germany’s 16 states are scheduled to meet to discuss next steps to fight the pandemic, Soeder said after a state cabinet meeting. He said there needs to be a “clear majority” before officials convene.

The comments reflect mounting tension over the next steps to control the pandemic in Europe’s largest economy. While the infection rate has slipped in recent days, the number of severe cases in German intensive-care facilities continues to rise and the pace of vaccinations remains sluggish.

Merkel’s spokeswoman on Wednesday reiterated the government’s support for a short, sharp shutdown proposed by Armin Laschet, the chairman of her Christian Democratic party and Soeder’s main rival for the bloc’s chancellor candidacy.

Due to the stubbornly high infection rate, “any plea for a brief, uniform shutdown is correct,” spokeswoman Ulrike Demmer said at a regular news conference. “A joint national response would also be important here,” she said, in a reference to Germany’s federal system under which the 16 regions are mainly in charge of health policy.

With national elections looming, politicians have been reluctant to impose new restrictions and have struggled to formulate a clear plan. While some less-affected municipalities are allowing business to reopen, other hard-hit areas are tightening policies. Hamburg and other cities have imposed curfews since the Easter weekend.

Local officials have unevenly applied rules to reimpose tougher restrictions when cases surge, and Soeder said Wednesday that he supports the idea of a so-called emergency brake nationwide.

Merkel had mentioned the possibility last week, effectively reducing state powers. The move would require a law that would have to pass the Bundestag and the Bundesrat, which represents state governments.