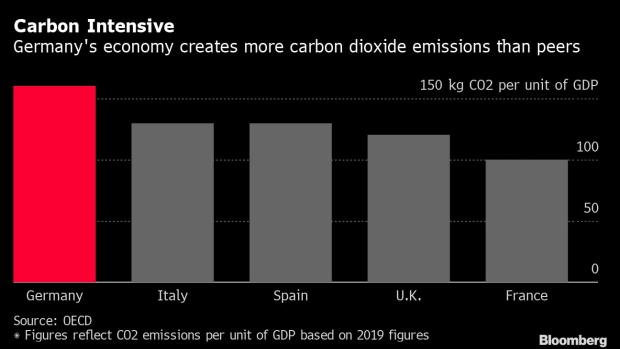 (Bloomberg) -- Chancellor Angela Merkel’s coalition is pushing through more ambitious legislation to tackle climate change as Germany’s two ruling parties seek to seize back the initiative from the Greens ahead of September’s national election.

With the vote just over four months away and the Greens leading in opinion polls, Merkel’s conservative bloc and her Social Democrat junior partners are seeking to recover from a court ruling last month, which determined a 2019 law put young people’s future rights at risk by postponing most emissions cuts until after 2030.

To respond to the setback, Merkel’s coalition plans to accelerate Germany’s path to carbon neutrality by five years to 2045 to convince voters of their environmental credentials. The cabinet is due later Wednesday to sign off on the new “climate protection law,” which will then go to parliament for approval.

While the government had until the end of next year to revise the legislation, the rapid revamp shows how critical climate change is for German voters, and the Greens are keeping up the pressure.

Annalena Baerbock, the party’s chancellor candidate, said the updated legislation has insufficient detail on how each sector will achieve its targets, doesn’t go far enough on energy and lacks a plan for financing.

“We have to be very honest and very clear about what needs to be done over the next 10 years,” she said in an interview with ARD television on Wednesday. “Unfortunately, the ruling coalition has failed to do that with this draft law.”

Constitutional limits on borrowing need overhauling so that Germany can finance the transformation to a climate-neutral economy, while still being able to afford new schools and hospitals, said Baerbock, a 40-year-old who has never held a government post.

The country also needs to double the pace of expansion of renewable energy sources and speed its exit from coal power, she added.

A draft of the law seen by Bloomberg sets targets for sectors like industry, energy and transport, with manufacturers obliged to cut annual carbon-dioxide emissions to 118 million tons by 2030 from 186 million tons last year -- a 37% reduction.

Germany, which emits proportionally more carbon than European peers, is also targeting a more ambitious goal of cutting emissions by 65% below 1990 levels by 2030. However, that would still not be compatible with the terms of the Paris Agreement and a target of at least 69% is needed, according to analysis by the Climate Action Tracker.

Environment Minister Svenja Schulze defended the legislation, saying it will provide planning security for investors in Green assets and force laggards to catch up if they fall behind on emissions-cutting targets.

“When the goals are not met, immediate work is required to make up for it,” Schulze, a Social Democrat, told ARD. “In that sense, the law has an extremely important scope in that it makes climate protection legally binding.”

Schulze said Germany has already allocated 80 billion euros ($97 billion) for areas including transport and greener buildings, and to help manufacturers become carbon neutral. The government is also planning to announce further measures within the next two weeks, she said.

“We have introduced a whole range of initiatives over the past three years and another crash program is coming,” Schulze added. “What we have achieved in terms of cutting CO2 is really impressive.”