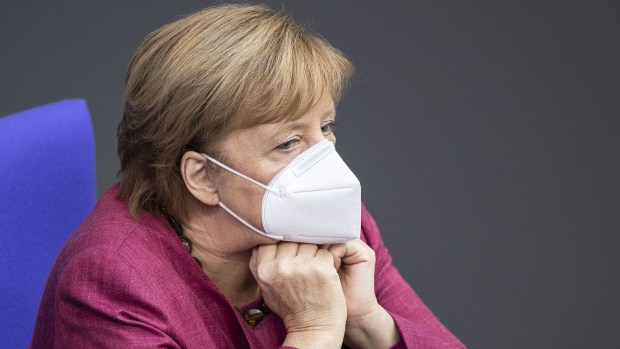 BERLIN, GERMANY - OCTOBER 29: German Chancellor Angela Merkel wears a protective mask as she sits in the Bundestag to outline the government's strategy to cope with the second wave of the coronavirus pandemic on October 29, 2020 in Berlin, Germany. The day before Merkel and the leaders of Germany's 16 states agreed that beginning this coming Monday all restaurants, bars, cultural venues, cinemas and sports facilities will temporarily close. Daily coronavirus infection rates of have recently skyrocketed to up to 15,000. (Photo by Maja Hitij/Getty Images) Photographer: Maja Hitij/Getty Images Europe , Photographer: Maja Hitij/Getty Images Europe

(Bloomberg) -- German Chancellor Angela Merkel delivered a wake-up call to the European Union by saying its member countries should have acted earlier to control the coronavirus, which is now surging on the continent, according to officials familiar with her comments.

Merkel, speaking to her 26 EU counterparts by video conference on Thursday, said that political realities kept them from imposing restrictions earlier, and that they would have to draw lessons from the current situation and act faster, said the officials, who asked not to be identified because the meeting is private.

Countries in the EU, where more than 210,000 people have died from the disease and nearly 6.5 million have been infected, have begun to impose lockdowns in an effort to stem the crisis. Germany, the EU’s largest economy, will impose a one-month partial shutdown starting Monday, while France will enter a nationwide lockdown from Friday.