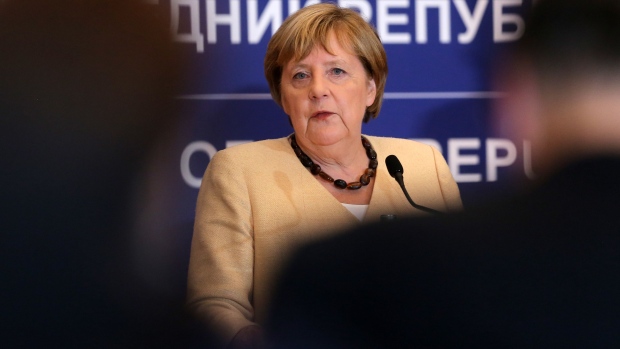 Angela Merkel, Germany's chancellor, speaks during a news conference with Aleksandar Vucic, Serbia's president, not pictured, in Belgrade, Serbia, on Monday, Sept. 13, 2021. Merkel said that Serbia's mineral reserves that can produce lithium are important for the auto industry, batteries and the future of mobility. Photographer: Oliver Bunic/Bloomberg , Bloomberg

As the three main candidates who hope to succeed her spend the final stretch by crisscrossing the nation in search of undecided voters, Merkel on Tuesday night appeared with Laschet at an event in her electoral district on the Baltic coast.

“Laschet will fight for every single job once he is Chancellor,” Merkel told the crowd, including hostile anti-lockdown protesters, gathered in the drizzling rain on the market place in Stralsund, about 250 kilometers (155 miles) north of Berlin.

Laschet, the 60-year-old chairman of Merkel’s Christian Democratic Union, is fighting an uphill battle after a series of missteps, with the conservative bloc trailing in the polls behind the Social Democratic candidate Olaf Scholz even as a poll published Tuesday showed a slight tightening in the race.

Support for the CDU and its Bavarian affiliate, the Christian Socialist Union, increased to 22%, with the Social Democrats unchanged at 25% in first place and the Greens holding on to 17% in third.

Earlier in the day, Scholz used a campaign stop in Volkswagen AG’s home town to hammer home a message that Germany needs to transition to a less-polluting and more advanced economic modal swiftly even if it puts jobs at risk.

“We need to constantly have in the front of our minds that we can’t afford to miss the boat,” Scholz said at an event in Wolfsburg alongside Daniela Cavallo, the head of VW’s works council. “In the car industry, and in many other sectors, it’s about being there at the front of the next wave.”

Scholz has tried to lure undecided voters from the political center by imitating Merkel’s moderate style, earning a rebuke from Laschet for being disingenuous.

“He has fought against her for the past four years and worked to prevent her from achieving her goals,” Laschet said in Berlin on Monday.

Merkel herself has mostly stayed out of the campaign fray. But with a defeat for her conservative bloc looking like a distinct possibility, the 67-year-old has become more engaged. In a Bundestag speech two weeks ago, she warned a SPD coalition with the Greens and the post-Communist Left party would be a threat to Germany’s wealth. On Tuesday, she also added that a left-leaning government would give up Germany’s opposition to joint debt issuance by the European Union.

“Please give both your votes to Armin Laschet next Sunday, because he will make sure that our wealth will be kept,” Merkel said at the rally in Stralsund.

After inviting him to her own turf, Merkel will also appear with Laschet this week in Munich and his home town of Aachen. As Germany’s most popular politician, the outgoing chancellor is hoping to elevate her ally Laschet, who’s struggled to benefit from her support because of a series of gaffes, including laughing while visiting flood victims. His attacks on Scholz in three television debates also failed to reverse his slide.

But not everybody in the CDU leadership is happy about Merkel’s return to the campaign arena. Former finance minister Wolfgang Schaeuble recently blamed Merkel for keeping Laschet out of the national spotlight by hanging on to the chancellorship even after giving up the CDU leadership.

Schaeuble was one of the group of CDU leaders who in April backed Laschet against most of the party base, many of whom preferred CSU leader Markus Soeder. Merkel had kept out of the power struggle and never made clear whom she would have preferred.