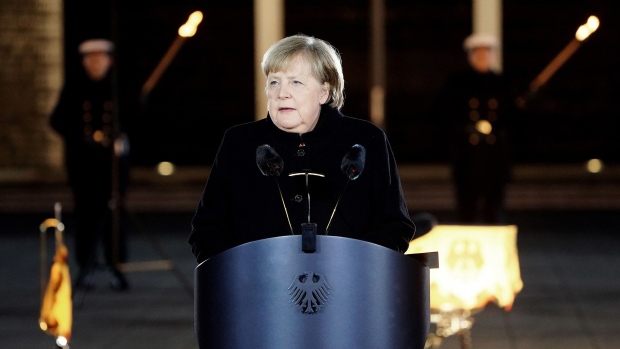 German Chancellor Angela Merkel pleaded with unvaccinated Germans to come forward and get shots, warning the country faced difficult weeks ahead as deaths and hospitalizations from coronavirus rise.

“Go and get vaccinated,” Merkel said in her last weekly podcast as chancellor. “Whether it’s your first vaccination or a booster, every vaccination helps.”

Merkel’s 16-year term as chancellor will come to an end next week, with Olaf Scholz of the center-left Social Democrats set to lead a new government with the Greens and pro-business Free Democrats. Germany meanwhile faces the onslaught of a fourth wave of infections, leading to rising deaths and hospitalizations.

Scientists have blamed the relatively low level of full protection for the severity of the latest outbreak. Around 69% of people are fully vaccinated, leaving almost 17 million people age 12 and older who aren’t properly inoculated, including more than 4 million 60 and up, the most vulnerable group.

The reasons for Germany’s relatively low vaccination rate have been hotly debated in recent weeks. Some districts in the former communist east, where distrust of state authority and the government runs deep, have large numbers of unvaccinated adults.

Others favor a homeopathic approach to health care and view the coronavirus shots as rushed products. Germany’s booster campaign got off to a slow and late start after much of the population was initially excluded.

“The highest possible vaccination rate will help us leave this pandemic behind us,” Merkel said in the podcast, the last of more than 600 over a 15-year period.