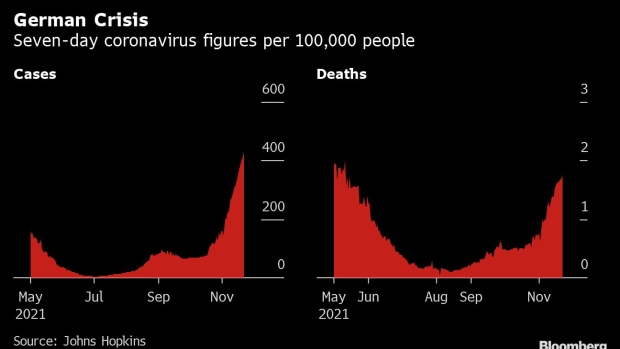 Merkel, who is due to be replaced by Social Democrat Olaf Scholz early next month, said Germany is in a serious situation as it remains “in an exponential growth pattern.” She has consistently called for tighter curbs to try to check the spread of the disease, but with her 16-year term almost over her ability to influence pandemic policy is limited.

“I only know that we need more contact restrictions,” Merkel said at a news conference after talks with her Polish counterpart in Berlin. “We have to look at the new situation closely every day.”

Since it took hold at the beginning of last year, 100,119 people have died from Covid-19 in Germany, according to the latest data from the RKI public-health institute.

Battling the fourth wave of the pandemic will dominate the early weeks of Scholz’s new administration, and he said Wednesday that he plans to set up a crisis unit in the chancellery to coordinate with Germany’s 16 states. He also raised the prospect of mandatory vaccinations for people working with vulnerable groups such as the elderly.

Many regional governments have already introduced tighter curbs in virus hotspots, including excluding people who haven’t been vaccinated from bars, restaurants, non-essential stores and some public spaces.

There were a further 351 Covid deaths in the 24 hours through Thursday morning, according to the RKI. Infections surged by a record 75,961 and the seven-day incidence rate per 100,000 people climbed to a new high of 420.