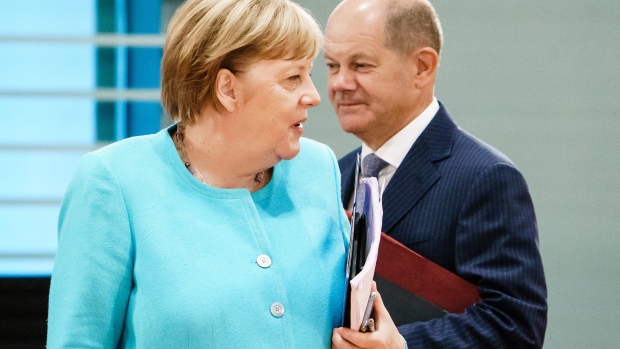 (Bloomberg) -- Chancellor Angela Merkel will invite likely successor Olaf Scholz to any bilateral meetings at this weekend’s Group of 20 summit in an effort to signal continuity in German leadership to the country’s international partners.

The move is exceptional for an outgoing government leader, as Scholz’s Social Democrats are still weeks away from finalizing talks on forming a coalition with the Greens and Free Democrats following their victory in last month’s election. Scholz, attending the meeting in Rome in his current role as finance minister, is aiming to be sworn in as chancellor in early December and Merkel will govern in a caretaker capacity until then.

The conservative leader, who did not run for re-election and whose Christian Democratic Union looks set to go into opposition after 16 years in power, will take Scholz along to meet world leaders including U.S. President Joe Biden, according to a German government official.

Another official described Merkel’s move as “historic” and said that it’s one of the rare cases where a head of government introduces her potential successor in this format. Even in some democratic countries, such an amicable handover of power would be rare, he added. Both officials asked not to be identified in line with briefing rules.

Merkel has attended all the G-20 summits since the inaugural one in 2008. According to the German government, the meeting in Rome -- where leaders will discuss issues including climate change, the pandemic and Iran -- will be her 16th.

At the G-20 in Hamburg in 2017, Scholz was involved as the mayor of the city, and was later criticized over the security operation after rioting near the summit venue.