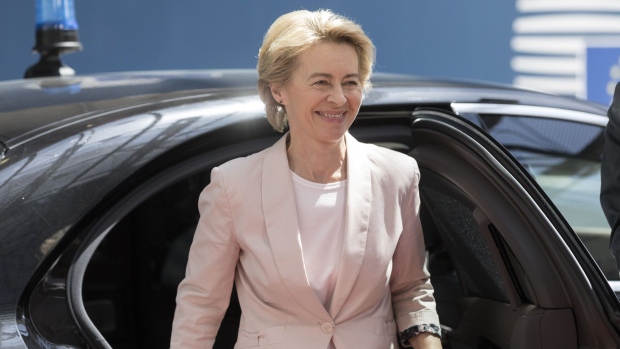 (Bloomberg) -- Ursula von der Leyen’s two-week dash to secure the most powerful policy-making job in the European Union may end with a photo finish.

Unexpectedly tapped to head the European Commission after weeks of grueling negotiations by national leaders, the German defense minister and ally of Chancellor Angela Merkel is chasing support among left-leaning factions to put her over the top in a secret ballot Tuesday in the EU Parliament.

At least half of the 153 Socialist members will probably support von der Leyen, which would help her surpass the needed majority of 376 votes, according to officials from the faction who asked not to be identified. Von der Leyen’s aides expect her to receive about 400 votes, according to a person familiar with their thinking.

“If you vote her down, what’s the alternative?” said Janis Emmanouilidis, director of studies at the European Policy Centre in Brussels. “It’s almost too awful to contemplate and, for her detractors, potentially counterproductive were EU leaders to nominate someone even less palatable.”

The 60-year-old polyglot is the centerpiece of a European top-jobs package that reasserts the authority of the EU’s core countries -- particularly Germany and France -- as the bloc confronts Brexit, U.S. protectionism under President Donald Trump, renewed Russian muscle-flexing and growing Chinese economic heft.

The commission’s powers include proposing and enforcing EU laws on everything from car emissions to mobile roaming fees, negotiating trade agreements and acting as Europe’s antitrust authority.

Von der Leyen, who is backed by several political groups in the European Parliament, including her own Christian Democrats, would be the first female president of the commission, the 28-nation bloc’s executive arm.

The deal also puts International Monetary Fund Managing Director Christine Lagarde of France in the presidency of the European Central Bank, Belgian Prime Minister Charles Michel in the chair of EU summits and Spanish Foreign Minister Josep Borrell in the bloc’s top diplomatic post. All the positions are becoming vacant this year.

The commission chief’s nomination was complicated by the EU parliament’s further fragmentation in elections in May, when the combined share of Christian Democratic and Socialist seats fell below 50% for the first time. The pro-EU Liberals and Greens posted gains along with euroskeptic forces, allowing the political center to hold.

While she wasted no time reaching out to the EU Parliament, where she went the day after her nomination and has spent many of the past 12 days, von der Leyen has faced three impediments.

Aside from damage to the EU’s institutional relations and its image that a veto of von der Leyen would have, she has two important advantages in her favor.

No national leader objected to her, in contrast to current commission President Jean-Claude Juncker, who faced opposition from two government chiefs in 2014. And the EU Parliament has long called for more women in the top jobs in Brussels.

If she’s elected, von der Leyen would assemble a team of commissioners proposed by national governments. The commission leadership is made up of one appointee from each EU country and the parliament would vote on the whole team in October.

--With assistance from Patrick Donahue.

To contact the editors responsible for this story: Ben Sills at bsills@bloomberg.net, Tony Czuczka, Flavia Krause-Jackson