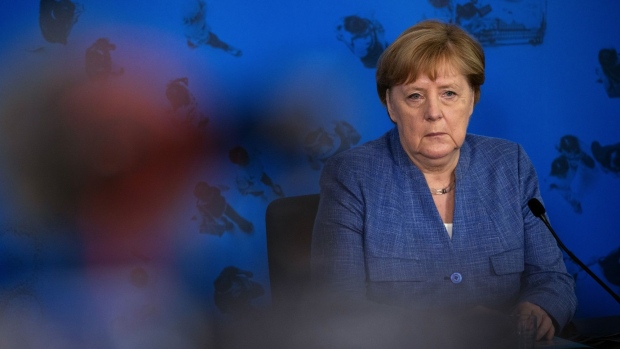 Angela Merkel, Germany's chancellor, pauses during a news conference at the Robert Koch Institute in Berlin, Germany, on Tuesday, July 13, 2021. Merkel reinforced the government’s urgent appeal for people to get vaccinated against Covid-19, saying the inoculation campaign will be the deciding factor for the future course of the pandemic. , Bloomberg

(Bloomberg) -- The Christian Democratic party of outgoing German Chancellor Angela Merkel continued to lose support while its main rivals remained stable in the latest Insa poll, according to weekly Bild am Sonntag.

While the bloc remains on track to lead the next government, the devastating floods that battered the country have shifted the dynamic in the election campaign. Conservative front-runner Laschet damaged his standing when he was caught laughing on camera in the midst of the catastrophe.

The CDU/CSU will very likely need at least one coalition partner after September’s election to secure a governing majority in parliament.

Insa’s poll showed the liberal FDP was the only party to gain ground, reaching a level of 13%, up one percentage point. The opposition Green party remained stable at 18% from a week earlier, as did the Social Democrats, the right wing AfD and left wing party Die Linke.

The flood, which has killed more than 160 people, has shown signs of shaking up the campaign with the CDU/CSU seeing its lead over the Greens narrow. Merkel’s cabinet has approved a 400 million-euro ($470 million) aid package to provide immediate help for people in affected areas.

Merkel isn’t running for a fifth term after 16 years in office.