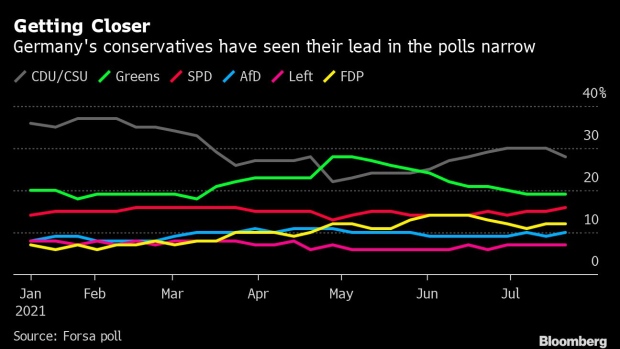 EUSKIRCHEN, GERMANY - JULY 20: German Chancellor Angela Merkel (L) and Prime Minister of North Rhine-Westphalia Armin Laschet (C) inspect the damage after heavy flooding of the river Erft caused severe destruction in the village of Bad Muenstereifel on July 20, 2021 in Euskirchen, Germany. Large parts of western Germany and central Europe were hit by flash floods in the night of 14 to 15 July, following days of continuous rain that destroyed buildings and swept away cars. The total number of victims in the flood disaster in western Germany has risen to at least 164, with many hundreds still missing. (Photo by Friedemann Vogel - Pool/Getty Images) , Photographer: Pool/Getty Images Europe

(Bloomberg) -- Germany’s conservatives lost voter support after the bloc’s candidate to succeed Angela Merkel as chancellor stumbled in his handling of floods that devastated large swathes of Germany.

The CDU/CSU’s lead over the Greens narrowed to nine percentage points after the group’s backing fell two points to 28% in a Forsa poll for RTL/ntv, the first to partially take in the impact of last week’s flooding.

Armin Laschet, the premier of hard-hit North Rhine-Westphalia and the Christian Democrat-led bloc’s candidate, was pilloried over the weekend for laughing in the background as the German president solemnly offered condolences for the flood’s victims.

“Even after his appearances in the areas affected by the flood disaster, he remains largely devoid of contour and color,” Manfred Guellner, head of the Forsa polling institute, said in an email. “The candidate’s weakness has led to a renewed decline in sympathy for his party.”

The conservatives will likely hope an aid package that’s due to be signed off by Merkel’s cabinet later on Wednesday can shift the debate.

After touring a flood-ravaged town near Bonn with Laschet, Merkel promised prompt financial support for rebuilding efforts. Laschet said his state would double the amount.

While the catastrophe put climate change at the top of the public agenda, the Greens have so far failed to capitalize, with support steady at 19%. The Social Democrats picked up one point to 16%.

The business-friendly FDP was flat at 12%, while the far-right AfD gained one point to 10%. The Left party was unchanged at 7%.