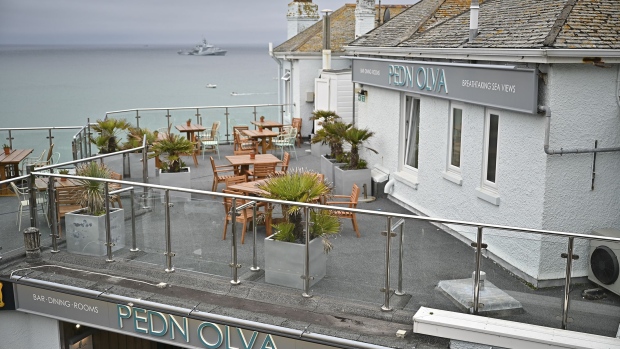 ST IVES, ENGLAND - JUNE 10: A view of the Pedn Olva hotel in St Ives which is housing security staff, some of the whom are reported to have been protecting the German G7 delegation, and media for the G7 summit and has announced it will shut completely following an outbreak of COVID-19 on June 10, 2021 near St Ives, England. It is reported that 13 staff are infected out of around 17 workers. UK Prime Minister, Boris Johnson, will host leaders from USA, Japan, Germany, France, Italy and Canada at the G7 Summit to be held in Carbis Bay, Cornwall - beginning Friday, June 11. This year the UK has invited India, South Africa, and South Korea to attend the Leaders' Summit as guest countries as well as the EU. (Photo by Jeff J Mitchell /Getty Images) , Photographer: Jeff J Mitchell/Getty Images Europe

(Bloomberg) -- News of a Covid-19 outbreak in one of the Group of Seven summit hotels in England has set off alarm bells in the German delegation. That’s because some members of Chancellor Angela Merkel’s security detail were already staying in the Pedn-Olva in the host town of St Ives before hotel staff tested positive.

For now, the affected members of Merkel’s security detail have self-isolated, but it’s unclear whether this will be enough to ensure her security.

Sky News reported on Thursday that one member of Merkel’s security staff said they have “been told nothing” and may end up buying a tent and sleeping on the beach. The question is how this will impact Merkel’s planned attendance.

The spokesman for Boris Johnson, the hosting prime minister, told reporters that she’s still coming. She is scheduled to land on Friday around 11 a.m. in Cornwall, along the southwest coast of England, just in time for the summit to kick off. Her spokesman, Steffen Seibert, could not be reached for a comment.

Merkel, 66, has received her first inoculation but is still not fully vaccinated. She is a scientist by training, and some officials in Germany previously expressed doubts about whether it was wise to attend the summit given concerns about a spike in U.K. cases. Johnson is now considering delaying the final stage of the pandemic lockdown easing in England, with a final decision due Monday, a day after the summit ends.

German health authorities have declared Britain as high risk and travelers returning from the U.K. have to go into a two-week quarantine.

Merkel said Thursday after a meeting with German state leaders in Berlin: “What concerns us is the so-called Delta variant, which is once again spreading in Britain very heavily.”

This would be her last G-7 after 16 years in power.