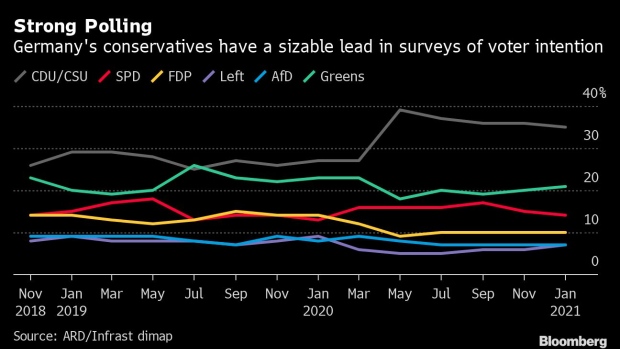 (Bloomberg) -- Angela Merkel has been a pillar of stability for Germany and the western world for the better part of two decades, but the party that kept her in charge of Europe’s biggest economy is grappling with the power vacuum she’s leaving behind.

A botched succession plan two years ago has put the Christian Democratic Union in a bind. Instead of a smooth transfer of power, the traditional anchor of German politics faces a messy free-for-all to defend its hold on the chancellery.

A two-day convention that starts Friday to elect a new leader can go two ways: kick start a process of renewal or usher in a period of stagnation and decline. While the party leader usually goes on to be candidate for chancellor for Germany’s conservative bloc, that step isn’t automatic this time.

The CDU isn’t even clear to what extent it will continue Merkel’s policy of cautiously deepening European Union integration. One leading candidate is calling for a much narrower focus on national interests and tighter controls on where German money gets spent.

“Merkel will no longer pull the strings together in Europe and form the binding element that she often did in the past,” said Alexander Dobrindt, caucus leader for the Bavarian CSU sister party and a frequent critic in the past.

The EU needs Germany to rebuild economies shattered by the pandemic and redefine the transatlantic relationship after four years of Donald Trump’s “America First.” U.S. President-elect Joe Biden holds Merkel in the highest regard so the CDU’s pick will have implications far beyond the country’s borders.

The Republicans in the U.S. lost control of Congress, Britain’s Tories are dealing with the complications that come with Brexit, and counterparts in Italy, Spain and France are out of power. Conservative parties in Western democracies are struggling.

Germany’s role at the center of Europe is “what the CDU and CSU want to preserve,” said Dobrindt.

The bloc is still well-positioned, thanks largely to Merkel’s steady stewardship of the coronavirus and how she moved the party to the political center. Delegates are taking note of her popularity and keen to avoid major upheaval, according to people familiar with the discussions.

But they’re torn because the candidates are all currently unpopular with German voters ahead of 2021 national elections. Their choices are between long-time Merkel antagonist Friedrich Merz, moderate state leader Armin Laschet and Norbert Roettgen, a foreign policy expert and former cabinet member.

Adding to the complexity are two potential chancellor contenders -- Bavarian Premier Markus Soeder from the Christian Social Union and Jens Spahn, the up-and-coming health minister from the CDU. Both might fare better among the broader electorate.

Electability has become a key concern for delegates. Merz has made it clear he’ll run for chancellor if he wins, but he’s a divisive figure and could bolster the chances of a coalition between the Greens, the Social Democrats and the Left party. That election calculus has caused some delegates to shift away from the 65-year-old former BlackRock Inc. director, who proposes a deeper break than his rivals.

“Whether it wants to or not, the CDU has to step out of the shadow of Angela Merkel,” Merz said in a column in Spiegel magazine. “Her achievements will be in the history books as of September.”

Laschet, 59, and Roettgen, 55, are both seen as more willing to nominate an alternative for the chancellor candidacy. Laschet has the edge between the two, but Roettgen has been gaining. The two could cancel each other out in first round, with Merz taking an early lead before the decisive tally.

If either Laschet or Roettgen win, the door would open for Soeder as a rare CSU option for the bloc. It’s happened only twice and both were losses -- the last time was in 2002, when Merkel’s chances were seen as slim.

After a brief flirtation with a run for chancellor, Spahn said on Sunday that he’s out of the race and reinforced his backing for Laschet.

The new CDU chief will face four tough state elections in the coming months and may be weakened before a national campaign really gets going. Meanwhile, Merkel -- who has outlasted four French presidents and five British prime minsters -- will still be running Germany.

The risk of Merkel’s presence overshadowing the CDU leader was evident after her hand-picked successor Annegret Kramp-Karrenbauer faltered following her narrow victory over Merz in December 2018. After a series of gaffes, she stepped down in February, reviving the succession battle.

Aside from its internal struggles, the CDU faces a challenging political environment. The Greens were on par with the conservative bloc before the coronavirus crisis, and the far-right Alternative for Germany is nipping at support.

But the German leader remains very popular, and the conservative bloc is wary her voters might not stick around.

“The chancellor will be missed very much,” said Soeder.