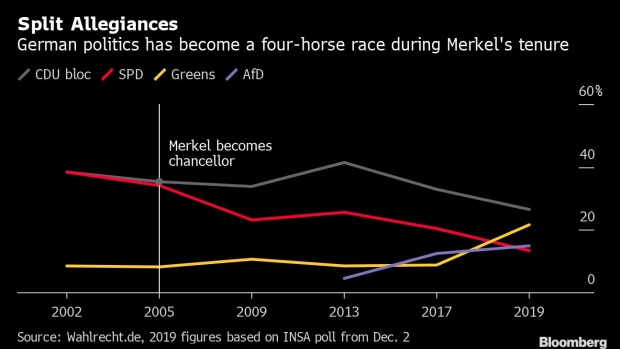 (Bloomberg) -- Germany’s Social Democrats backed away from a threat to ditch their alliance with Chancellor Angela Merkel and eased demands for the government to abandon its balanced-budget policy.

Days before a key party convention, the SPD’s new leadership dismissed calls for an immediate departure from the ruling coalition and watered down a wish list that Merkel’s Christian Democratic-led bloc would almost certainly have rejected.

“We don’t want a helter-skelter exit from the coalition,” Norbert Walter-Borjans said in an interview with party journal Vorwaerts. Walter-Borjans was elected SPD co-leader with Saskia Esken at the weekend, defeating a duo led by Finance Minister and Vice Chancellor Olaf Scholz.

Even Kevin Kuehnert, the leader of the SPD’s youth wing and one of the most outspoken critics of the Merkel administration, warned that delegates gathering in Berlin Friday should reflect carefully on what they want. Kuehnert is seeking the post of deputy leader as the party tries to reverse a prolonged slump in opinion polls.

“Those who leave a coalition give up a measure of control,” Kuehnert said in an interview with the Rheinische Post newspaper published Wednesday.

As well as triggering a fresh round of uncertainty in Europe’s biggest economy, a snap election would be a risky bet for the SPD. Support for the party, traditionally one of Germany’s two main political forces, has slumped to be roughly on par with the far-right AfD in recent polls.

The latest INSA survey for Bild newspaper published Monday showed support for the SPD fell one percentage point to 13.5% compared with the previous week. Voting intentions also indicated that Merkel’s bloc, stable on 26.5%, would be able to form a coalition with the Greens, who lost half a point to 21.5%.

A push to abandon Merkel’s zero-deficit spending policy, as Walter-Borjans and others had proposed, is to be set aside for now, according to draft proposals for a convention motion seen by news agency DPA.

“We just concluded the 2020 budget, in which we avoided new debt,” Johannes Kahrs, the SPD’s budget spokesman in the Bundestag, said in an interview with ZDF television Wednesday. “But if that is what is wanted, then we’ll talk about the 2021 budget.”

At stake is whether the 65-year-old Merkel will be able to serve out her fourth mandate ending in 2021 or be forced to step down early. While she could head a minority government, the collapse of the coalition would probably trigger a snap election within months.

The SPD’s main demands going into the convention include a minimum wage of 12 euros ($13.30) per hour, more spending on infrastructure and education, and a higher carbon price as part of a recently agreed climate package, according to reports by local media.

That in itself would make for difficult negotiations with Merkel’s bloc. While CDU leader Annegret Kramp-Karrenbauer took a hard line on the SPD’s push for concessions, Merkel’s chief spokesman, Steffen Seibert, signaled the chancellor may be open to compromise.

--With assistance from Birgit Jennen.

To contact the reporter on this story: Raymond Colitt in Berlin at rcolitt@bloomberg.net

To contact the editors responsible for this story: Ben Sills at bsills@bloomberg.net, Iain Rogers, Chris Reiter