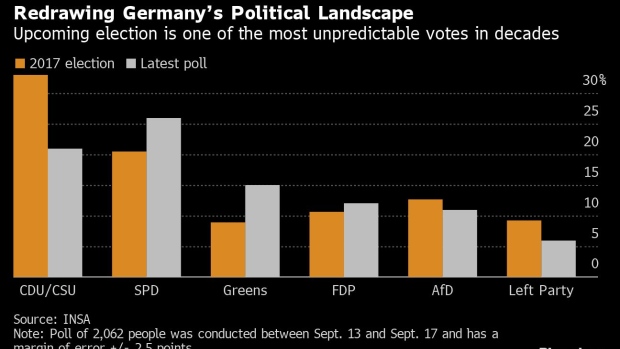 (Bloomberg) -- Christian Democrat Armin Laschet was put on the defensive in Germany’s third election debate as his two main rivals for the chancellery presented themselves as natural governing partners after Angela Merkel departs.

In a 90-minute debate that was one of the last opportunities for Laschet to spark his flagging campaign, frontrunner Olaf Scholz of the Social Democrats  and Green candidate Annalena Baerbock at times joined forces. Scholz made it clear that his party favors forming a coalition with the Greens after the Sept. 26 election.

“I think that most voters, after all these years, want the Union to go into opposition,” Scholz said, referring to Merkel’s Christian Democratic Union-led bloc. Baerbock agreed.

Scholz was ranked the winner in two previous televised debates and 42% of viewers in a Forsa poll after Sunday’s face-off said he also won this one, compared with 27% for Laschet and 25% for Baerbock.

The SPD under Scholz has staged an unprecedented reversal in the last two months, moving from a distant third behind Merkel’s bloc and the Greens to first place, as Laschet has failed to gain traction among voters. In a fragmented political environment, a Scholz victory wouldn’t guarantee him the chancellorship, since Merkel’s successor will likely have to forge an agreement between three parties.

Laschet was back-footed from the beginning of the debate, with more than half of it focusing on wealth disparity and climate, issues that the SPD and Green candidates were able to dominate.

With Scholz scheduled to testify to a Bundestag committee on Monday on a raid at his Finance Ministry, the format meant that Laschet was unable to open a clear line of attack on the issue.

Merkel’s bloc has attacked Scholz for his response to the Sept. 9 raid, conducted by prosecutors investigating a money-laundering watchdog within his ministry only two weeks before the vote. The topic was addressed briefly, with Baerbock demanding that Scholz come clean with lawmakers on the committee.

Viewers were treated to a policy-heavy debate with Laschet and Baerbock engaging in spirited attacks and Scholz sticking to a matter-of-fact delivery.

Laschet, after sustaining a grilling from Baerbock, gained traction on the issue of domestic security, a policy area he’s been touting for the last week. He drew a distinction on refugees, saying those who break the law must leave the country.

“If somebody is a criminal, he should be deported,” said Laschet, who has backed Merkel’s decision not to close Germany’s borders to asylum seekers.

Scholz’s lead over Laschet’s bloc showed little sign of tightening over the last weekend before the election, as candidates prepared to fan out across the country to make their final pitches to voters.

The SPD remained at 26% support, while the CDU and its CSU Bavarian partners rose 1 percentage point to 21%, according to an INSA poll for Bild am Sonntag newspaper. The Greens held steady at 15%.

Scholz earlier laid out his conditions for a coalition, telling the Bild am Sonntag newspaper that a potential partner would have to support taxing the wealthy and back raising the minimum wage to 12 euros ($14) an hour in his first year. That clearly counts for the Greens. But a third potential partner, the liberal Free Democrats, has ruled out any tax increases.