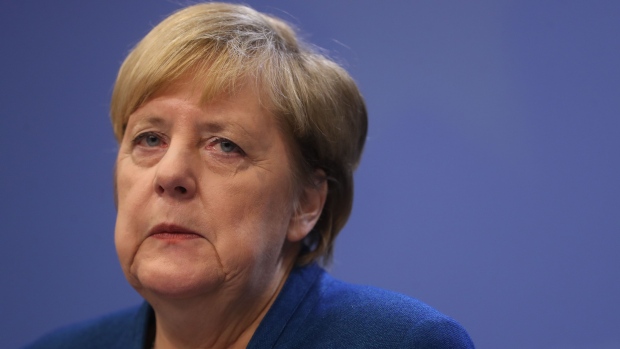 A German national flag flies in front of emissions issuing from a cooling at the Schwarze Pumpe lignite fueled power plant, operated by Lausitz Energie Bergbau AG (LEAG), in Spremberg, Germany, on Friday, Aug. 16, 2019. Government plans to exit coal-fired power generation by 2038 have enraged voters already stirred up by a wave of immigration in 2016. Photographer: Krisztian Bocsi/Bloomberg , Bloomberg

(Bloomberg) -- A meeting between Chancellor Angela Merkel and Germany’s coal-producing states dragged on well into the night in an attempt to accelerate the country’s phaseout of the dirty fossil fuel.

The talks that began Wednesday evening were intended to reach an agreement over compensation for shutting down the country’s coal-fired power generation by 2038.

Earlier on Wednesday a spokesman for Merkel said significant progress had been made in earlier negotiations.

The biggest resistance to a cleaner energy matrix had come from states in the former communist East, which relies most heavily on coal and has a lower per capita income than the western part of the country. The states had wanted to see reassurances regarding the 40 billion euros ($45 billion) they were promised for infrastructure projects as compensation as well as job creation measures before plants are closed.

On the other hand, Merkel has faced ongoing pressure to slash carbon emission more swiftly. Climate issues are on the top of voter concerns, polls show, and most approve pulling out of coal. Germany will miss its 2020 targets under the Paris Agreement and could fall further behind schedule if it doesn’t start closing coal-fired power plants soon.

Merkel’s predicament on the coal issue in part feeds into a broader political challenge for her, with the Greens party and the far-right Alternative for Germany party rising on both sides of the political spectrum to squeeze Germany’s traditional mainstream parties, including her Christian Democrats. The AfD has been particularly strong in the eastern mining states.

Coal plant closures are to last from this year to 2038, in line with carbon emission reduction targets. Utilities too have been haggling with the government over compensation. While they agreed on plans to shutter hard coal plants, feuding over lignite operations risked derailing the timeline.

The talks in Berlin on Wednesday were part of a broader government effort this week to showcase climate measures. On Tuesday the government announced massive investments in railways so as to lure passengers from cars and planes, which have a higher carbon footprint.

To contact the reporter on this story: Brian Parkin in Berlin at bparkin@bloomberg.net

To contact the editors responsible for this story: Ben Sills at bsills@bloomberg.net, Raymond Colitt