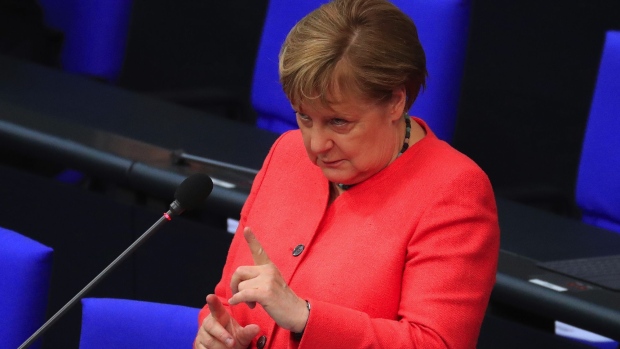 “The path is a rocky one and will require much willingness and readiness to compromise from all sides,” Merkel told delegates in Germany’s upper house of parliament, the Bundesrat, as the country begins its six-month presidency of the European Union. “Considering the current state of the economy, time is pressing and every day counts,” and the goal is reach a deal before the summer break.

The bloc’s member states are negotiating a 750 billion-euro (US$843 billion) fund, drawn partly from joint borrowing, to pull the 27-member bloc out of economic peril.

The German leader has stressed the grave challenges the EU faces this year, including a slumping economy, wrangling over the U.K.’s exit and the battle to tame the coronavirus pandemic. Merkel is also navigating the bloc’s role between China’s rising status as a superpower and the fading position of the U.S. under President Donald Trump.

She slightly toughened her tone on China’s Hong Kong policy, even as she tried to walk a fine line, noting that the country was both a partner and a competitor.

“We will also speak about the future of Hong Kong, where we are concerned that the important principle of one country two systems is being more and more eroded,” she said, adding that “Europe must assume more global responsibility in the world.”

As head of government, she routinely addresses the lower house, or Bundestag, but this was only her third visit to the Bundesrat in 15 years as chancellor and her first since 2007. The upper chamber is compromised of representatives from Germany’s 16 states.

To underscore Europe’s global ambitions, Merkel said Africa will be a focus of the bloc’s foreign policy during her presidency, which comes as she prepares to leave the political stage after next year’s German elections. A summit of the EU and African Union will take place in October, she said.