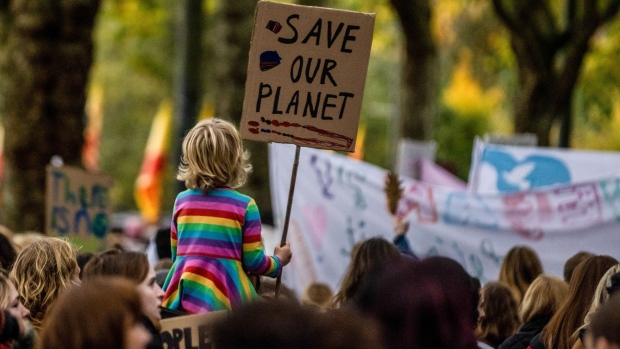 A young climate activist holding a placard reading "Save our planet" during a protest march on the "Youth Day" at the COP26 climate talks in Glasgow, U.K., on Friday, Nov. 5, 2021. Climate negotiators at the COP26 summit were banking on the worlds most powerful leaders to give them a boost before they embark on two weeks of fraught discussions over who should do what to slow the rise in global temperatures. , Bloomberg

Looking at the climate future we face, you’d be well within reason to make a grim assessment of humanity. More than three decades after scientific consensus found that a hotter planet will bring disastrous impacts, we continue to pump increasing amounts of planet-warming greenhouse gases into the atmosphere.

But that’s a limited view. Most of our understanding of where the world is headed is, in fact, devoid of the very things that make us human: how our opinions change in the face of evidence and what we do as a group in response. A study published in Nature last week shows that, if you took those additional factors into consideration, the world is likely headed for warming about 0.5 degrees Celsius lower by the end of the century compared with where predictions stood after last year’s COP26 climate summit.

Scientists predict our possible climate futures using models. These models typically take a particular storyline of emissions—how much the world emits each year for decades to come—and then predict what global temperatures would result from that. Other approaches look at targets, say, reaching net-zero emissions by 2050, and extrapolate what kind of energy system the world will have to build to get there.

It’s a feat of human ingenuity and computing power that we can do this at all. And, yet, most experts will also happily admit to the limitations of their models. That’s because the world is far too complex to run as a perfect simulation—yes, the Matrix is not real. That means researchers are forced to choose fewer variables to analyze in order to simplify the worlds they’re trying to predict.

A group of researchers is now questioning the assumptions in that selection process, such as the tendency to ignore how public opinion shapes our climate future. “It’s difficult to predict how political systems and social settings give rise to climate policy,” said Frances Moore, assistant professor at University of California, Davis and lead author of the study. “Climate scientists see their role as informing policy, which makes it okay to not try and model those policy outcomes.”

Moore and her colleagues went against the grain and included how humans would react to climate impacts and what kind of policies that would lead to. When they combined climate systems with ever-changing social settings, their models show “a high likelihood of accelerating emissions reductions over the 21st century, moving the world decisively away from a no-policy, business-as-usual baseline.”

In the 100,000 possible futures that the model generated, nearly half end up with a world warming 2.3°C by the end of the century after emissions peak in early 2030s and reach zero by 2080. In a little less than a third of those futures, people agree to aggressive climate polices that would restrict warming to 1.8°C by 2100. The remaining minority of possible futures see the world warming 3°C or even 3.6°C.

In other words, more than 75% of all possible futures see a world that’s cooler than the COP26 outcome. Actions based on current policies would see the world warm by 2.7°C, according to Climate Action Tracker’s assessment in November.

No outcome seems to keep warming below 1.5°C — the stretch goal of the Paris Agreement — and one reason for that is Moore and her colleagues don’t model for the use of carbon-removal technologies, which experts say would most likely be needed to meet that target. Moore also said the current models focus on national climate policies and do not include the highly unpredictable impacts of potential geopolitical developments at the international level during the transition away from fossil fuels.

Still, the importance of understanding how human behavior helps climate policy and how climate policy shapes human behavior is set to grow, says Navroz Dubash, professor at the New Delhi-based Centre for Policy Research. “The way we build our world introduces behavioral changes,” he said. “So you want do it in such a way that avoids locking in a high-carbon future.”

Here’s an example: cities that are designed to have more green spaces and higher penetration of public transport will also be the ones that are more adaptable to a warming planet and have lower carbon footprints. Their roads will have less congestion and their air will be less polluted, which will make people happier and more willing to support the policies that created those cities.

What’s clear is that, as the climate imperative grows, the world is gaining a more nuanced understanding of how to influence outcomes that will lower emissions and thus rule out more and more of the disastrous futures that still remain in sight. “There’s a lot of good news,” says Moore. “Even 10 years ago, we would not have ruled out a 4°C or 5°C world, which is very different than a 2°C or 3°C world.”