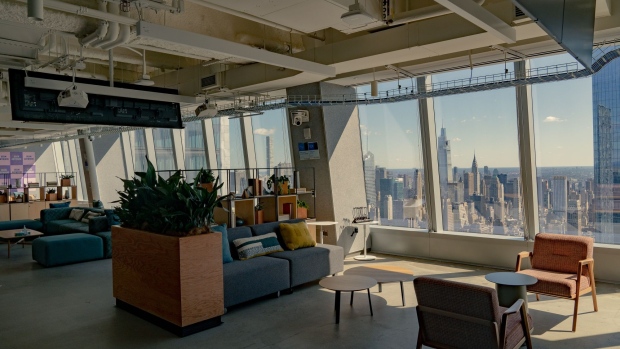 Desks at a new Meta office space in the Farley Building in New York, U.S., on Wednesday Sept. 29, 2021. While many companies have reduced their office space, Meta Platforms Inc., formerly known as Facebook, is expanding in New York, with a goal of bringing workers back early in 2022, despite the disruptions caused by the pandemic. , Bloomberg

(Bloomberg) -- Meta Platforms Inc. is planning to close one of its offices in New York after scaling down its expansion plans in the city, according to people familiar with the matter.

The company is exercising its option to terminate its lease at 225 Park Ave. South in Manhattan, said the people, who asked not to be identified because the information was private.

Meta has been consolidating its New York workforce, building out offices in Hudson Yards and moving ahead with plans for the Farley Building near Pennsylvania Station. The company has been dialing back some of its growth plans in the city, though, Bloomberg News has reported.

“Two twenty-five Park Avenue South has served as a great bridge space to get us to our new offices at Hudson Yards and Farley,” Meta spokesperson Jamila Reeves said Monday in an emailed statement. “We are working to ensure we’re making focused, balanced investments to support our most strategic long-term priorities.”

The planned closure comes as Meta Chief Executive Officer Mark Zuckerberg seeks to make sweeping changes including reorganizing teams and reducing headcount at the company for the first time.

Meta will freeze hiring and restructure some teams to trim expenses and realign priorities, Zuckerberg said during a weekly Q&A session with employees, Bloomberg News reported earlier. The Menlo Park, California-based company will likely be smaller in 2023 than it was this year, he said, announcing what would be the first major budget cut since the founding of Facebook in 2004.

Meta will reduce budgets across most teams, even those that are growing, and that individual teams will sort out how to handle headcount changes. That could mean not filling roles that employees depart, shifting people to other teams, or working to “manage out people who aren’t succeeding,” Zuckerberg said.

The cost cuts and hiring freeze are Meta’s starkest admission that advertising revenue growth is slowing amid mounting competition for users’ attention. Besides economic pressures, the company’s advertising business, built on precise consumer targeting, has lost some of its edge due to new privacy restrictions from Apple Inc. on tracking iPhone users. Also, rival TikTok is attracting younger users away from Meta’s Instagram platform.

Zuckerberg is also making an expensive bet on the metaverse, an immersive virtual reality future where he imagines people will eventually communicate, an effort he has said will lose money for many years.