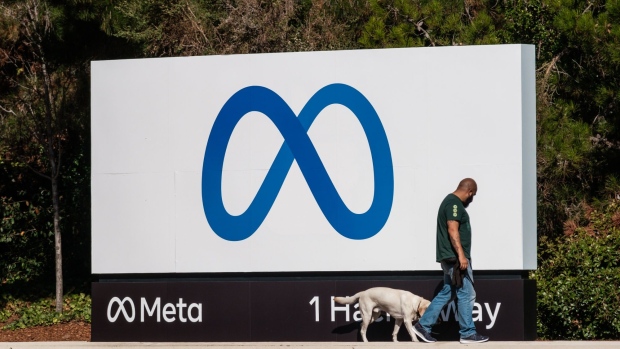 A security dog is walked around signage at Meta Platforms headquarters in Menlo Park, California, U.S., on Friday, Oct. 29, 2021. Facebook Inc. is re-christening itself Meta Platforms Inc., decoupling its corporate identity from the eponymous social network mired in toxic content, and highlighting a shift to an emerging computing platform focused on virtual reality. , Bloomberg

Chudnovsky joined Meta in early 2015 from PayPal Holdings Inc. and oversaw the product under then-Messenger boss David Marcus. Chudnovsky was promoted to vice president of Messenger in 2018, reporting to product boss Chris Cox, after Marcus left to run an internal blockchain division.

The move brings fresh upheaval to a division — and company — that’s had a tumultuous year. The former Facebook Inc. dropped its name in October in an attempt to spotlight its push into the metaverse, a vision of interconnected virtual worlds. Its policies for dealing with privacy and content moderation also have come under a microscope in the wake of whistle-blower Frances Haugen releasing thousands of internal documents.

Chudnovsky has been leading Meta’s messaging integration efforts, a major technical effort announced by Chief Executive Officer Mark Zuckerberg in 2018 to enable messaging among all of the company’s apps. Users can now send messages between Messenger and Instagram, for example, and Meta has plans to build end-to-end encryption into those services over the next few years, Chudnovsky says. Once encrypted, Meta will let users send messages between Messenger, Instagram and WhatsApp.

Those responsibilities will be divided among two different Meta executives. Loredana Crisan, who was worked at Meta almost six years, will take over Messenger, Instagram direct messaging and Messenger Kids. Maher Saba, who joined the company in 2013, will oversee the remote presence products.

Chudnovsky says that he plans to stick around until the second quarter of 2022, and then hopes to spend a lot of time relaxing. Marcus, his good friend, announced last week that he was also leaving Meta to start something new, but Chudnovsky says he has no plans to join whatever Marcus is building.

“I’ve been running like crazy since I was 16 years old,” Chudnovsky says. “I want to get a feel for what it feels like to be bored.”