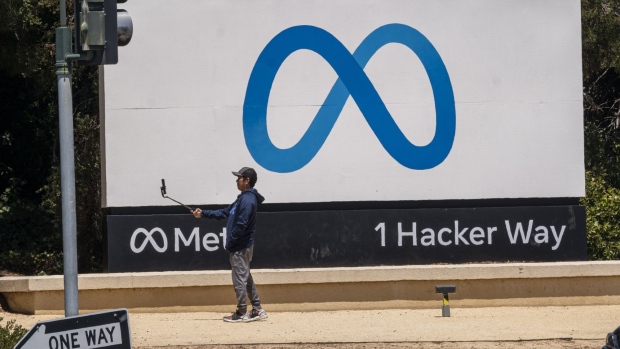 (Bloomberg) -- Meta Platforms Inc. says social media companies should stick together in a fight against dozens of lawsuits alleging they harm young people.

A panel in St. Louis convenes Thursday to consider whether a single judge should be assigned to oversee suits across the US claiming the companies are causing teenagers to suffer from sleep deprivation, depression and anxiety -- and even to take their own lives. Multidistrict litigation, or MDL, is used to centralize cases that raise common issues and promote efficiency.

While Meta said in a court filing it would be impractical to split up the cases naming multiple companies as defendants, Snap, ByteDance Inc.’s TikTok, and Alphabet Inc.’s YouTube said they preferred to defend themselves separately.

They argued that Meta faces the bulk of the lawsuits, and that it would be inefficient for them to be dragged into the Instagram owner’s fight.

TikTok said in a filing that the MDL process shouldn’t combine “competing defendants,” even if they offer similar products. YouTube objected to being forced to “participate in scores of cases in which it is not named as a party.”

When The Scrolling Doesn’t Stop: Social Media Lawsuits Pile Up

Snap, in a more nuanced argument, said the suits filed against it are different from those that target Meta. The apps are not, for example, “like chemically similar drugs that treat the same disease and have similar side-effects but are manufactured by different companies,” Snap said in a filing.

Meta is named as a defendant in almost all of the more than 70 suits filed so far. Snap, which faces the next largest number of suits, has been named in about 20 cases.

The suits against Meta stand out because they cite a whistle-blower’s complaint that Instagram knew from internal studies that many adolescent girls using the photo-sharing app were suffering from depression and anxiety around body-image issues.