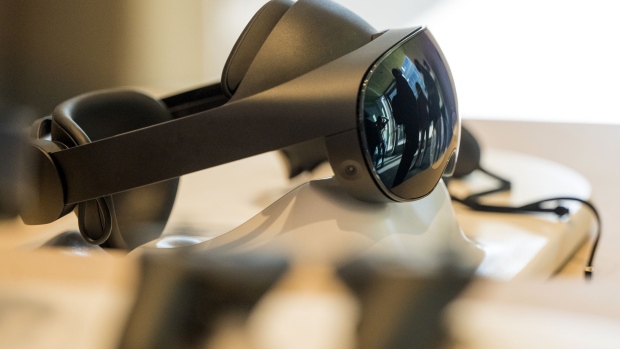 The Meta Quest Pro virtual reality (VR) headset during a media preview at the Meta Store in Burlingame, California, US, on Tuesday, Oct. 25, 2022. Meta Platforms Inc.'s newest virtual-reality headset is a foray into the world of high-end VR devices designed to entice creators and working professionals to adopt Mark Zuckerberg's vision for an immersive digital future. , Bloomberg

(Bloomberg) -- Meta Platforms Inc.’s lawyer said the US antitrust enforcers are pursuing “an aggressive effort to make law with no real evidence” in their suit to block the company from buying a virtual reality startup.

Opening arguments began Thursday in the Federal Trade Commission’s suit to stop Meta’s acquisition of Within Unlimited Inc. because the deal will tamp down future competition in the young VR space. The argument that Meta’s decision to buy —  instead of building its own offering — will lessen the number of potential rivals is one that’s rarely used by the regulator.

“If the FTC’s speculation about what a firm might do would be enough to block an acquisition, every vertical acquisition would be blocked,” Mark Hansen, Meta’s lawyer, argued Thursday before US District Judge Edward Davila in a San Jose, California, courtroom. Such an idea is outside the bounds of the powers Congress has awarded the agency, as well as prior legal precedent, he said.

If the judge halts the deal, Hansen said the move could have a chilling effect on acquisitions in which companies buy businesses they don’t already compete with, which is how Meta says it views this transaction.

“This is the ballgame, this is the case that will decide whether this deal goes forward or dies,” Hansen said.

The eight-day hearing will be a major test of Meta’s virtual reality aspirations, which Chief Executive Officer Mark Zuckerberg has said is the future of the company. The effort would help Meta expand beyond social media and give it control over its own platform and app store through its Quest VR headsets.

The stakes are also high for the FTC. The unique argument is an early test for FTC Chair Lina Khan and her more aggressive stance to antitrust enforcement. Meta announced last October its plan to acquire Within, the maker of the popular virtual reality fitness app Supernatural, for an undisclosed sum. The suit is the first time the FTC has preemptively challenged a deal by Meta, which has bought more than 100 smaller companies over the past decade. Tech companies and investors are closely watching the suit amid concerns the case may make startup acquisitions more difficult.

Separately, the agency said Thursday it would try to stop Microsoft Corp.’s proposed $69 billion acquisition of Activision Blizzard Inc., saying the deal between the Xbox maker and gaming publisher would harm competition.

The FTC, which led the opening statements on Thursday, said its move is an effective enforcement of antitrust laws and would avoid the need to wind down a merger at a later date when a monopoly is current and clear.

The agency expects to demonstrate that the acquisition “would eliminate” Meta’s efforts to build its own VR fitness app, FTC’s lawyer Abby Dennis said, essentially removing a potential rival from the industry. “The basic economic facts of the acquiring company’s overall size, resources, capability and motivation in respect to entry, and that objective evidence is abundant here,” Dennis said.

Meta’s CEO had been pushing the company to get into its own fitness party app and the company was in the middle of an exercise to decide between its options when word got around that Apple Inc. was “supposedly” considering an acquisition of Within and its Supernatural app, according to an internal message from Meta’s former gaming executive Michael Verdu to colleagues that the FTC presented as evidence. That news “accelerated everything,” the message said.

Meta’s Hansen contested the idea, saying internal conversations about building a dedicated virtual reality fitness app didn’t go further than a brainstorming exercise because it would’ve been too hard to do.

To make its case against the Meta-Within deal, the FTC is relying on court cases from the 1970s that antitrust laws can prohibit deals that have an impact on potential competition, said Rebecca Haw Allensworth, an antitrust professor at Vanderbilt Law School.

The FTC wants “to win but they also want to change the law,” said Allensworth. Invoking those old cases “is not desperation. They are trying to return to that.”

--With assistance from Leah Nylen.