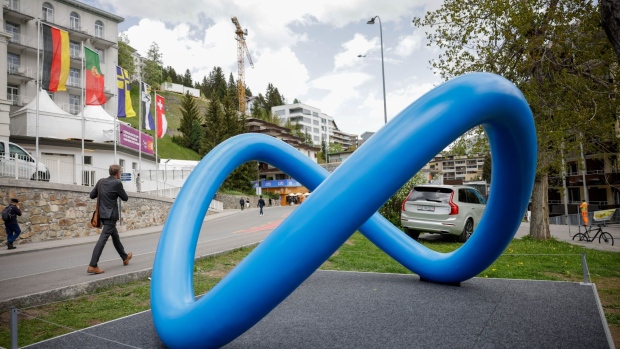 The Meta Platforms Inc. pavilion on the opening day of the World Economic Forum (WEF) in Davos, Switzerland, on Monday, May 23, 2022. The annual Davos gathering of political leaders, top executives and celebrities runs from May 22 to 26. Photographer: Jason Alden/Bloomberg , Bloomberg

(Bloomberg) -- Facebook parent Meta Platforms Inc. will expand the types of information it shares publicly about political advertising in the months leading up to the 2022 U.S. midterm elections.

Meta will soon include targeting data for political and issue ads as part of its public advertising archive, meaning anyone will be able to see how political committees or other political groups target their messages to voters. The move is meant to help people -- especially researchers and journalists -- better understand how campaigns use Meta’s services to try to influence voters during election cycles, said Jeff King, Meta’s vice president of business integrity.

The archive will include data on which targeting options advertisers used, such as focusing on people in a specific location or with particular interests. Meta will also show whether an advertiser used a custom audience -- a list of users connected to a campaign’s email list, for example -- or asked Meta to help target the ads using a “lookalike audience.” The archive currently shows data on who saw an ad, but not on how the ad was targeted.

The company has offered some of this data to researchers, but will make all of it publicly available starting in July. The information will be included on ads from as far back as August 2020, King added.

Meta has been considering other possible political ad changes following the 2020 U.S. general election. The company banned all new political ads in the week before the 2020 election as a way to try to prevent misinformation, but that strategy is being reconsidered, Bloomberg reported in February.