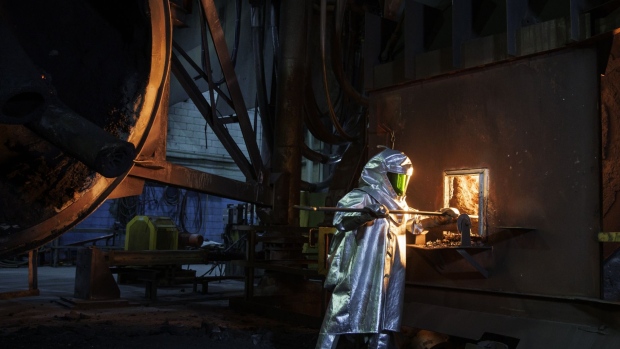 A worker takes a sample of molten nickel matte from a top blown rotary converter the Vale Copper Cliff Nickel Smelter in Sudbury, Ontario, Canada, on Wednesday, June 1, 2022. Nickel is the key ingredient in the stainless steel used in everyday appliances, but it's also critical for the transition away from fossil fuels, since it's used in the batteries automakers need to electrify the world’s car fleet. , Bloomberg

(Bloomberg) -- Industrial metals are on track for the worst quarter since the 2008 financial crisis as prices are pummeled by recession worries. Copper, the great economic bellwether, has ricocheted into a bear market from a record four months ago, while tin just tumbled 21% in its worst week since a 1980s crisis froze trading for four years.

It’s a dramatic reversal from the past two years, when metals surged on a wave of post-lockdown optimism, inflationary predictions and supply snarls. Now, inflation is here and supplies are still tight. But prices are plummeting as worries about a slowdown in industrial activity across major economies dovetail with slumping demand in China.

For a metal like copper, its uses in everything from heavy industrial machinery to advanced electronics mean the market is tightly linked to economic shifts, and the retreat marks a signal from commodity markets that efforts to get prices back under control are having some early successes. The mood in metals has soured even as Chinese Covid-19 lockdowns start to ease, and there are signs that traders there are betting copper prices will fall further.

“Even if China recovers in the second half, it won’t be able to single-handedly boost prices back to new highs — that age has gone,” Amelia Xiao Fu, head of commodities strategy at BOCI Global Commodities, said by phone from London. “If other major economies are heading towards a recession, China won’t be growing at exceptional rates either.”

Chinese manufacturing activity is already shrinking, and S&P Global gauges on Thursday showed European manufacturing output contracting for the first time in two years, while US output hit a 23-month low. Even so, the magnitude of the accelerating selloff in copper and other industrial metals suggests that investors are betting on much steeper declines in demand in the coming weeks.

Copper hit a 16-month low of $8,122.50 a ton on the London Metal Exchange on Friday, with an 11% drop so far in June putting it on course for one of the biggest monthly losses of the past 30 years. Metals from aluminum to zinc have also plunged and the Bloomberg Industrial Metals Spot Subindex is down 26% this quarter, headed for the biggest drop since the end of 2008. Tin has more than halved from its March peak.

Metals have been harder hit than other commodities like crops and energy — where supplies and trade have been more forcefully affected by Russia’s invasion of Ukraine. The Bloomberg Energy Spot Subindex is up 10% since the end of March, while a corresponding agriculture index fell 9.7%.

Yet copper and several other metal markets are still facing some of the tightest supply conditions ever. With inventories dwindling globally and little sign of significant new supply, even staunch copper bulls like Goldman Sachs Group Inc. had warned that demand destruction may be necessary to help ease the strain.

The rout in industrial metals started earlier this month after the Federal Reserve hiked interest rates by 75 basis points, and warned that its effort to bring rampant inflation back under control risked sparking a recession. But the selloff accelerated last week even as investors in other markets start to price in an earlier end to the Fed’s rate-hike cycle.

The Federal Reserve has warned that it has little influence over the supply-side drivers that have underpinned the surge in commodities like crude oil, while demand for essential goods like gasoline and food will remain resilient as the pressure on consumers’ finances grows.

But the Fed’s rate hikes could have a much more immediate impact on discretionary spending, potentially bringing an end to boom in metals demand in areas like property, car-making and durable goods. And with manufacturers facing rising borrowing costs, there are also growing risks to demand in areas like construction and industrial machinery, which account for a major portion of overall usage.

Evidence of the bearish shift in sentiment is clearest in the Chinese market, where open interest in Shanghai Futures Exchange copper contracts has risen sharply during a steep decline in prices. That signals that traders are adding new shorts, rather than selling out of bullish positions. On the LME, exchange data suggests the recent slump has been driven more by investors bailing on bets on rising prices, while bearish positioning has been broadly flat for most of the month.

That could reflect hesitation about betting against the market at a time when exchange inventories remain near critically low levels, after a sharp decline in stockpiles helped drive a historic surge in spot copper prices late last year. Nickel bears got caught out in an even bigger short squeeze in March, while a new supply crisis is brewing in the zinc market after readily available LME inventories sunk to a record low last week.

For now, the recessionary risks around copper are driving away generalist investors, said BOCI’s Fu.

"Some of the so-called tourists have decided they want to get out for the time being, and from a trading perspective that makes sense — but fundamentally these markets are still very tight."