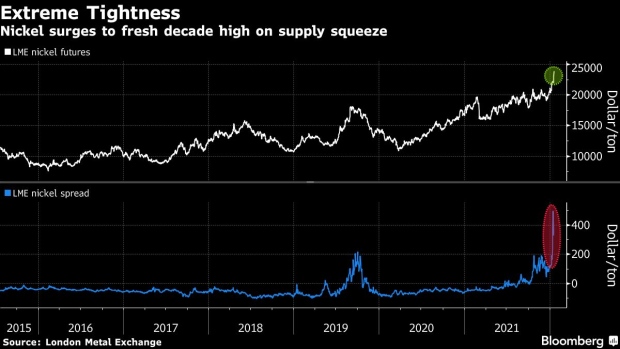 (Bloomberg) -- Base metals are heating up yet again, with nickel reaching $24,000 a ton for the first time in more than a decade and tin notching up a fresh record on supply snarls and China’s monetary easing.

Metals supplies are dwindling amid the global recovery from the pandemic with all the main London Metal Exchange contracts in backwardation -- a condition in which prices for cash delivery are higher than futures -- signaling supply constraints. The nickel market reached its tightest since 2007 after a plunge in exchange stockpiles, which prompted closer monitoring from the bourse.

Nickel jumped further following a 4.9% surge on Wednesday as Chinese lenders lowered borrowing costs for a second straight month after the central bank cut policy loan rates and pledged more easing to spur the economy, which is under pressure from an embattled property sector, a pillar of metals demand.

“In addition to the latest liquidity easing from China, extremely tight metal supply is a key driver of the rally,” said Wang Yue, an analyst with Shanghai East Asia Futures Co. In nickel’s case, “demand from electric-vehicle batteries is so strong that immediate supply can’t keep up,” he said.

Read more: Metals Key for EVs Will Be Pricier for Longer After Record Year

In spot news, production at the China-backed Tagaung Taung nickel-processing plant in the Sagaing region in Myanmar was halted this month after electricity was cut off, researcher Shanghai Metals Market said, citing a report from The Irrawaddy. The plant produces 85,000 tons of ferronickel annually and is the largest in the country, according to the report.