Base metals booked the worst quarterly slump since the 2008 global financial crisis as China’s economy recovered only gradually and fears of a world recession intensified.

The London Metal Exchange Index tumbled 25 per cent since the end of March, although the decline has been magnified due to prices spiking that month following Russia’s invasion of Ukraine. Tin has been the worst performer, plummeting 38 per cent, while aluminum dropped by almost a third and copper by 20 per cent. It was the first quarterly decline for the entire index since the start of the pandemic. 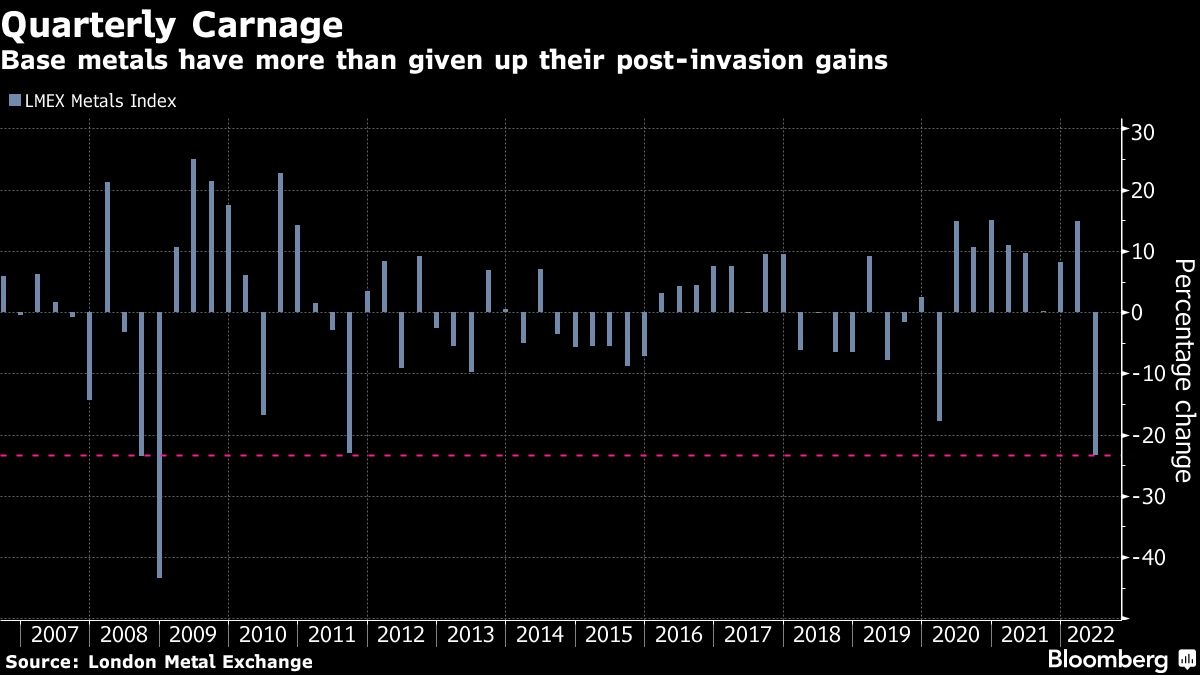 “Markets have been buffeted by both growth and inflation worries for some time now and are not getting any relief from G-7 central bankers, most of whom are intent on raising interest rates further,” ED&F Man analyst Edward Meir wrote in his metals report.

A gauge of Chinese factory activity expanded in June for the first time since February, as virus controls were eased. The improvement was fairly muted, however, and a weak property market continues to weigh on metals demand. The Covid Zero policy also remains intact, despite a relaxation of quarantine rules, meaning there’s a constant risk of more restrictions if case numbers pick up again.

The looming threat of a recession in the US, and perhaps even globally, continues to hang over the market. US equities markets opened lower as Federal Reserve Chair Jerome Powell and other central bankers warned the world is shifting to a regime of higher inflation at the European Central Bank’s annual forum in Portugal. At the very least, major economies are heading for a slowdown that will curb construction activity. New US consumer spending data suggested the economy is on weaker footing than previously thought as rapid inflation and interest-rate hikes persist.

On Thursday, copper dropped 1.7 per cent in London. Aluminum, nickel and zinc lost 1 per cent, 4.5 per cent and 6 per cent, respectively. Gold futures for August delivery dropped 0.6 per cent to settle at US$1,807.30 in New York. Gold dropped 7.5 per cent in the second quarter.