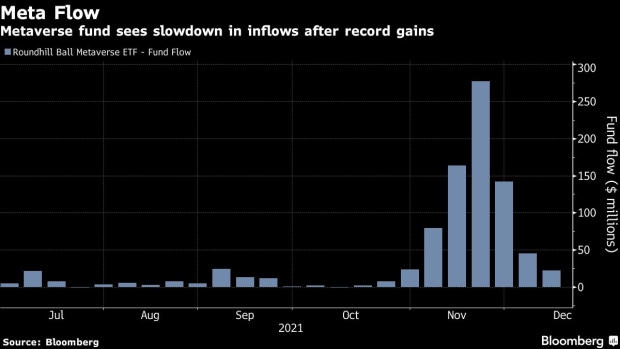 (Bloomberg) -- The rush to capitalize on the virtual-reality boom is intensifying in the world of exchange-traded funds, as First Trust Advisors LP announces the latest offering.

The Indxx Metaverse ETF plans to track tech-powered firms across emerging and developed markets, according to a Tuesday filing with the Securities and Exchange Commission. It will be passively managed.

ETF providers are rushing to stake a claim on what Mark Zuckerberg called “the next frontier” in human communication and interaction when he rebranded Facebook Inc. as Meta Platforms Inc.

New funds tracking the trend are popping up in South Korea and Canada, and analysts estimate the market will reach nearly $800 billion by 2024 -- an annual growth of about 13%.

Read more: What the Metaverse Is, Who’s In It and Why It Matters: QuickTake

First Trust is one of the largest sellers of thematic funds, with almost $150 billion in ETFs under management.

“I think it shows lots of validation for the theme when a large issuer jumps on,” said Athanasios Psarofagis, ETF analyst for Bloomberg Intelligence.

The firm follows Roundhill Ball Metaverse ETF, which goes by the ticker META and came to market in June. META drew $664 million of cash in November, the most since its inception, and now manages $866 million, according to data compiled by Bloomberg.