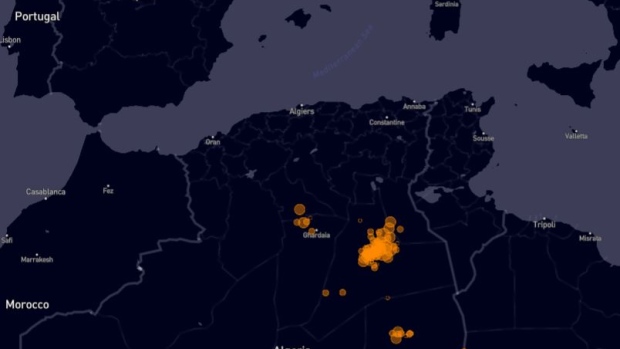 (Bloomberg) -- A series of large methane plumes were detected by satellite near oil and gas fields, processing plants and pipelines in Algeria, which is among the world’s top emitters of the potent greenhouse gas.

At least five clouds have been identified so far in August, mostly in or around a sparse desert area roughly 570 kilometers (354 miles) southeast of the capital Algiers, according to Kayrros SAS, a geoanalytics company that parses satellite data to track down methane releases. The worst plume was spotted on Aug. 18. It had an estimated emissions rate of 121 metric tons an hour.

Algeria is a global methane hotspot and was responsible for some of Africa’s most severe emissions of the greenhouse gas over the past few years, according to Kayrros’ analysis. The methane intensity of the OPEC member’s energy output was the fourth-highest among a selection of producers last year, according to the International Energy Agency.

Methane, which is the primary component of natural gas, traps more than 80 times more heat than carbon dioxide in the short term. Curbing emissions of the gas could do more to slow climate change than almost any other single measure and scientists are targeting leaks from the oil and gas operations because they offer the biggest potential reductions at the cheapest cost.

If the three largest events lasted an hour, together they would have the same short-term climate warming impact as the annual emissions from more than 12,000 passenger vehicles in the U.K.

The findings add to our understanding of the extent to which methane is leaking into the atmosphere. Plumes have been spotted in dozens of countries, from Canada to Iraq. Scientists are just beginning to pinpoint the biggest sources of methane and existing data isn’t yet globally comprehensive. Satellites have difficulty tracking releases near the equator and offshore. Cloud cover, precipitation and varying light intensity can also impact observations.