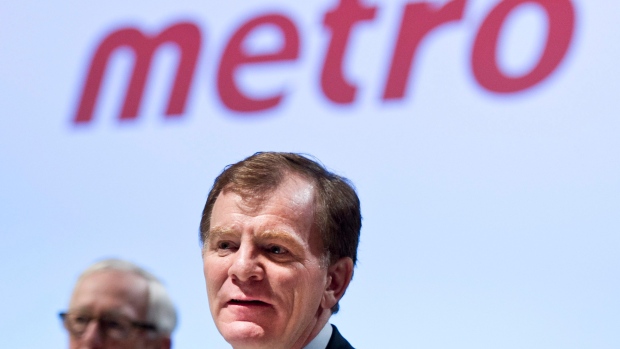 Eric La Fleche, president and CEO of Metro, waits for the start of the grocery and pharmacy chain's annual meeting Tuesday, January 31, 2012 in Montreal. , THE CANADIAN PRESS/Paul Chiasson

Another corporate leader is warning about the impact of Ontario's plan to raise the province's minimum wage.

"The announced minimum wage increase in Ontario will put significant pressure on our industry in 2018," said Metro CEO Eric La Flèche in a statement Tuesday. "We will strive to mitigate this impact in order to continue on our growth path."

Ontario Premier Kathleen Wynne's government announced a plan earlier this year to gradually boost the minimum wage up to $15 per hour by the start of 2019 as part of a broader overhaul of the province's labour rules.

The plan has been met with criticism from the business community. Magna International recently put Ontario on notice, saying the province was making itself a less competitive place to do business. Meanwhile, Cineplex CEO Ellis Jacob told BNN earlier this month his company was looking at various options for offsetting the rising cost of doing business in Ontario.

And on Monday, a report by Canadian Centre for Economic Analysis said The Fair Workplaces, Better Jobs Act could put 185,000 jobs at risk in the province within two years of implementation. In turn, Ontario Labour Minister Kevin Flynn gave no indication the province is going to reverse course.

“We’ve worked hard to make sure Ontario’s business climate is competitive, and we are committed to working with the business community to bring forward initiatives that will improve our competitiveness even more,” he said in a statement. “That being said, we will not back down from our plan to bring fairness to Ontarians.”

Metro said it anticipates the new wage rules will cost the company as much as $50 million in 2018. As of the end of 2016, Metro had 259 stores in Ontario. On July 26, rival Loblaw also warned about the impact of a higher minimum wage in Ontario and Alberta, saying it would take $190 million off its bottom line in 2018.

“To some extent, I think for the grocers they’re all in the same boat. So if they have difficulty passing through higher prices, then I think they’re just going to have to eat it. And you’ll probably see their margins decline.”

Metro CEO: Ontario wage hikes will "put pressure on the industry as a whole." Size and pace of increases "pose a significant challenge"

Metro CEO: The "pace" of minimum wage hikes "makes it a challenge." Notes energy has gone up "significantly" in Ontario over past few years