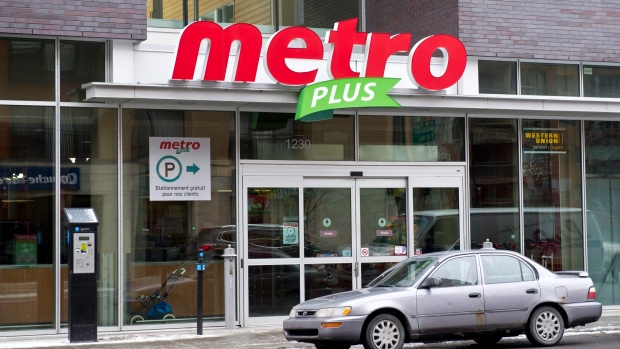 MONTREAL -- The Metro grocery chain will allow customers across Quebec to bring reusable containers for the purchase of fresh products in what one expert describes as a "game changer" for an industry facing increasing consumer concern about single-use plastics.

The grocery and drug store company announced Monday that beginning April 22, customers will be able to use their own packaging at the deli, meat, fish, seafood, pastry and ready-to-eat meal counters.

Plastic containers and zipper bags, which must be clean and must not feature a company name, will be filled with product by staff and labelled for checkout. The staff who handle outside containers must wash their hands more frequently and avoid contact between the containers and surfaces used to prepare and serve foods, according to the company's website.

In a statement, the company said the goal is to reduce single-use packaging.

"This is why we implemented a simple structure for customers to bring their own containers from home without having to compromise the quality or safety of the products they purchase in our stores," senior vice-president Marc Giroux said in a statement.

Sylvain Charlebois, who researches food policy and safety with Dalhousie University in Halifax, says that until now the major grocers have shied away from reusable containers over concerns about cleanliness and contamination.

Metro's decision, which he called a "game changer," shows the company has decided that meeting customers' demands should outweigh possible food safety risks, which could include the transmission of pathogens such as listeria or E. coli.

"The call that Metro is making is that its more important to comply with what consumers are expecting of grocers and take on some risk from a food safety perspective, rather than just do nothing," he said in a phone interview.

Charlebois, senior director of Dalhousie's agri-food analytics lab, said it's only a matter of time before other national grocery chains follow suit, taking into account each province's food safety legislation.

He said that while price and freshness are still the top customer priorities, environmental sustainability and stewardship are quickly climbing the list. He expects Canadian chains to partner with services such as U.S.-based Loop, which provides reusable containers for customers to take home and return to be cleaned in store.

Metro, on the other hand, has chosen to go with a more simple plan that allows for customers to bring their own clean resealable plastic containers and bags.

The practice is already being tested in stores in three Quebec cities: Drummondville, L'Ancienne-Lorette and Saint-Eustache.

Charlebois says by acting quickly, Metro has placed itself at the forefront of the debate around the use of plastic, which he says is "great for the company, great for the consumers."

However, he says execution could be complicated, especially as staff members risk offending customers if their containers are deemed not clean enough.

Metro's announcement was welcomed by the administrator of a zero-waste advocacy group, who says its proof that companies are listening to consumers who are increasingly demanding eco-friendly options.

"As consumers, we have more power than we believe," said Audrey Mougenot of the Montreal-based Association Quebecoise Zero Dechet. "It's up to us to ask companies and producers to give us the service we want."

She said Metro's service will be especially important in rural areas, where customers may not have access to a bulk or zero-waste grocery store.

Mougenot says interest in the zero- or minimal-waste lifestyle has exploded in the last few years amid growing concern for the environment. She says people can start with small changes, such as making their own cleaning products, reducing the amount of food they throw out or bringing their own reusable containers.