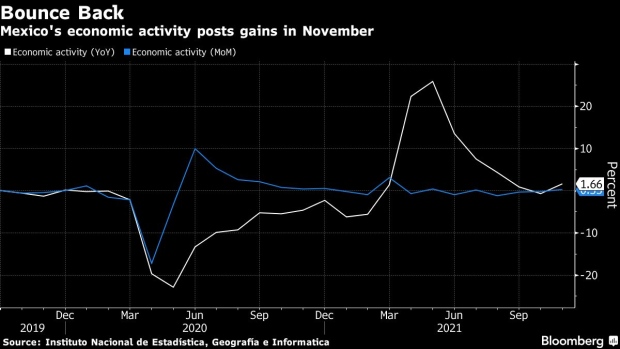 (Bloomberg) -- Mexico’s economy grew in November for the first time in four months, although it’s unclear whether it will be able to avoid recession at the end of the year.

Economic activity rose 0.35% from the previous month, broadly in line with estimates from analysts surveyed by Bloomberg, according to a report published by Mexico’s statistics institute Tuesday. On an annual basis, it expanded 1.66%, above the 1% growth expected by economists.

Latin America’s second-largest economy still risks facing another decline in gross domestic product in the final three months of 2021, after a contraction in the third quarter. Whether in recession or stagnant, the economy poses a challenge for policy makers who are contending with inflation above 7%, rising interest rates and uncertainty over the government’s agenda.

Latin America as a whole likely grew in the fourth quarter, thanks to a positive performance by smaller countries that offset the drag from Brazil and Mexico, according to a forecast by Oxford Economics. On a monthly basis, Mexico’s economic activity fell in August, September, and October, according to the national statistics agency.

November’s data reflects a brief reprieve in Mexico’s battle against the pandemic: the wave of infections due to the delta variant of Covid had subsided and the omicron variant wouldn’t send case counts back up again until near the end of the year.