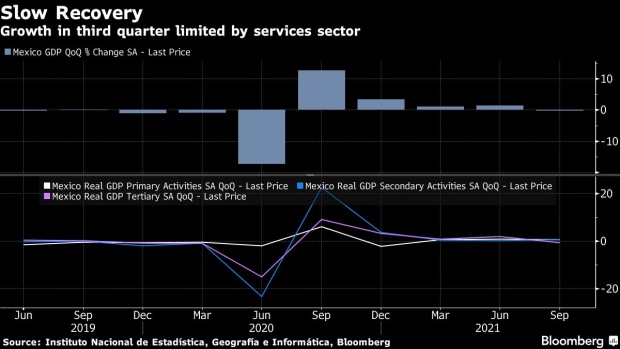 Gross domestic product declined 0.2% from the previous three-month period, compared to the median estimate in a Bloomberg survey of no growth. It’s the first contraction since the second quarter of 2020, when Mexico imposed its harshest set of restrictions to tackle the Covid-19 pandemic. From a year ago, GDP grew by 4.6%, according to preliminary data from the national statistics institute published Friday.

The contraction halts the recovery of Latin America’s second-largest economy, which still has to recoup pre-pandemic levels after suffering last year its worst recession in almost a century. It also complicates plans by President Andres Manuel Lopez Obrador, who has repeatedly said the economy was doing “well” after refusing to boost public spending to help households and companies during the coronavirus outbreak.

Mexico in April passed legislation banning most subcontracting in an effort to combat tax evasion and ensure employers cover benefits. While the measure helped to boost formal hiring, it hit the string of service companies dedicated to labor outsourcing. The country also saw a jump in coronavirus cases in August, leading to an unexpected contraction of economic activity that month.

The services sector shrank 0.6% in comparison to the previous three-month period, while the agriculture and the manufacturing sectors grew 0.7% each.

“The downturn in the third quarter seems mainly due to headwinds from the pandemic on services and domestic demand that should be transitory. Lower infections and fewer lockdowns in October already point to a rebound in the fourth quarter.

Falling activity and a lingering negative output gap will not prevent the central bank from increasing rates amid worrisome inflationary pressure, but reduce the probability of policy makers accelerating the tightening pace or extending it significantly above interests that are consistent with a neutral rate.”

The latest coronavirus wave right after the July vacation period limited consumer spending, Gabriela Siller, director of economic analysis at Grupo Financiero BASE, said. That coupled with inflation that has hovered around 6% for the past few months has hurt Mexican demand.

“Inflationary pressures limit the buying power of the population,” she said. “We’re not going to see a complete recovery of GDP until 2023 and in terms of GDP per capita until 2027.”

The growth of the informal sector of the economy and a decline in wages have also meant that a portion of the population has less income to spend, said Pamela Diaz Loubet, an economist with BNP Paribas Mexico, in part due to the outsourcing law. In the meantime, consumers’ savings have declined.