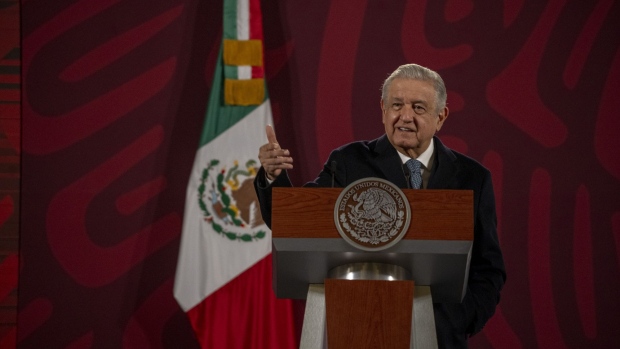 (Bloomberg) -- President Andres Manuel Lopez Obrador’s proposal to give control of Mexico’s electricity market to the state utility has scared away would-be green-energy investors at a rapid pace, the country’s wind and solar associations warn.

In addition to the $20 billion already invested in the country’s wind and solar sector, a further $10 billion will be required by 2024 to meet the country’s clean energy goals, according to Nelson Delgado, representative for the Mexican associations of wind and solar energy, known as AMDEE and ASOLMEX. But the pace of investment from international renewable-energy companies has slowed sharply while the power reform bill is debated in congress, putting Mexico behind in its push to transition away from dirtier fuels.

“With or without the reform, it is already damaging investment,” Delgado said in a phone interview Tuesday. “Above all, it is affecting the pace of investment. Why? Because regulatory uncertainty has put the brakes on new projects and has hurt confidence for new investors to come to Mexico.”

AMLO, as the president is known, made his proposal last fall that would alter the constitution to prioritize energy generated by the state-owned utility Comision Federal de Electricidad (CFE). Getting the bill passed requires AMLO’s ruling Morena party and legislative allies to win over opposition lawmakers to gain the two-thirds majority needed for approval in both chambers, plus some support at the state level. Mexico’s lower house of congress held an open parliament last week in an effort to reach agreements, and further talks are expected in the coming months.

The president has promised that a more nationalized energy sector will revive Mexico’s economy by enabling the country to be self-sufficient in energy and cast off its dependence on volatile foreign markets. But critics say the proposed reform would reverse years of renewable energy advances at a time when the rest of the world is moving in the other direction.

A study published earlier this month by the U.S.’s National Renewable Energy Laboratory (NREL) found that the overall cost of operating Mexico’s national electricity system may increase by as much as 52.5% if the energy reforms are approved; annual CO2 emissions could rise as high as 65.2% under the most extreme scenario. As much as 99% of Mexico’s wind and solar power is generated by private companies, the solar and wind trade groups say, while CFE is more focused on natural gas, hydro-electric power and fossil fuels.

The NREL report “is perfectly consistent with what we’ve seen in terms of the increasing importance of wind and solar projects in Mexico and our own internal calculations,” said Delgado, noting that Mexico could put at risk its Paris Agreement commitments if the reform passes. “If wind and solar energy is displaced by inefficient thermo-electric plants from the Comision Federal de Electricidad, it has an impact on costs and emissions.”