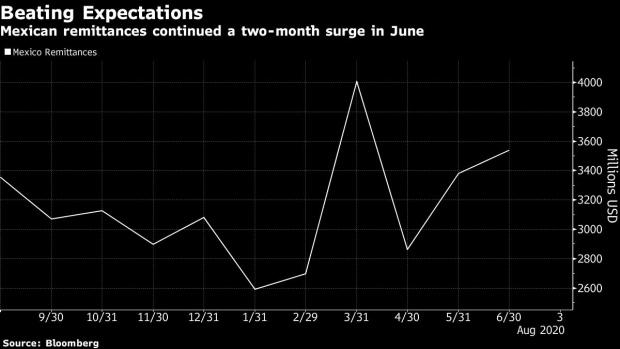 Latin America’s second-largest economy posted $3.54 billion in June remittances, the biggest inflow since March and an 11% gain compared to a year ago, the central bank said on its website Monday. The result topped all analyst estimates in a Bloomberg survey, which had $3.21 billion as the average forecast. In a video on Saturday, Lopez Obrador had predicted $3.4 billion.

The figures are a rare instance of good economic news for Lopez Obrador as Mexico likely faces its worst activity contraction in almost a century this year amid a slowdown caused by the spread of the coronavirus. Remittances have stayed positive because employment in essential industries in the U.S., including agriculture and construction, is dominated by Mexican workers, said Marco Oviedo, an economist at Barclays in New York.

“They’re going to stay strong,” he said. “It seems like the worst has already passed.”

It’s the fourth consecutive month that remittances beat the estimates, baffling economists who initially thought they would suffer due to the decline in activity in the U.S., the source of most of the money Mexicans sent home.

“The sharp contraction of activity and employment in the U.S. have not impacted in a visible way the flow of remittances to Mexico,” wrote Goldman Sachs Group Inc. economist Alberto Ramos in a note. “Solid workers’ remittance flows have been adding support to the current account and to private consumption.”

Ramos added that the higher remittances numbers will be a huge boost to low-income families, who receive the majority of money sent back.