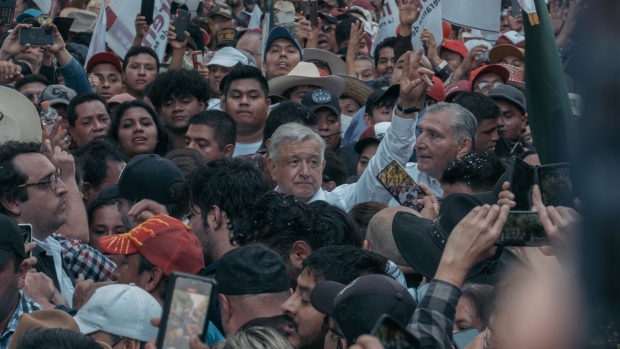 Andres Manuel Lopez Obrador, Mexico's president, center, greets attendees during a rally in support of the proposed electoral reform in Mexico City, Mexico, on Sunday, Nov. 27, 2022. AMLO took thousands of Mexicans to the streets for the first time since he took office in 2018, celebrating the upcoming fourth anniversary of his rule. , Bloomberg

(Bloomberg) -- Andres Manuel Lopez Obrador, Mexico’s president and longtime protest leader, took thousands of Mexicans to the streets for the first time since he took office in 2018, celebrating the upcoming fourth anniversary of his rule.

Supporters gathered early Sunday on Paseo de La Reforma, one of Mexico City’s major downtown thoroughfares, and made their way toward the city’s main square to hear AMLO, as the president is known, give his annual address.

In the 90-minute speech, AMLO said Mexico’s minimum wage will increase next year by about 20%, and that the measure will be announced by the national minimum wage commission in the coming days.

He also recapped four years of infrastructure and development projects, repeated promises to root out corruption, called on US politicians to respect Mexicans working abroad, and expressed solidarity with Brazilian President-elect Luiz Inacio Lula da Silva, among other topics.

“Mexico is considered one of the best places in the world to invest,” AMLO said. “Our government has achieved record levels of foreign investment.”

The president’s supporters filled the Zocalo for his speech, which can hold more than 100,000 people, as well as the streets leading into the main square. Buses flooded the capital, bringing supporters from various states across Mexico.

AMLO announced the rally days after swarms of people marched in Mexico City to protest his attempts to overhaul the country’s electoral system. He insisted that his march shouldn’t be seen as a “show of muscle” in response to the demonstration against the reform, which is currently being debated in congress.