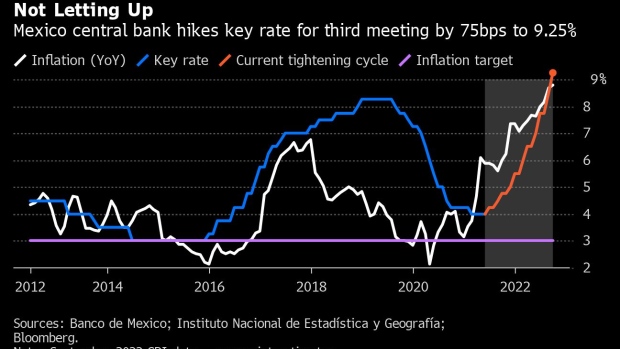 (Bloomberg) -- Mexico raised its benchmark interest rate to a record 9.25% on Thursday as policy makers prioritize their fight against inflation over reviving a slowing economy.

The central bank delivered a third straight increase of three quarters of a percentage point, it said in a statement on Thursday. The move was forecast unanimously by all 25 economists in a Bloomberg survey. It also revised its price gain projections upwards, indicating that headline inflation would remain at 8.6% through the end of 2022 and reach 3.1% only by the third quarter of 2024.

The decision came after the US Federal Reserve last week raised its own policy rate by the same magnitude. Mexican policy makers keep a close eye on the Fed, since when the gap between US and Mexican rates narrows it can trigger destabilizing outflows of capital.

“The Board will assess the magnitude of the upward adjustments in the reference rate for its next policy decisions based on the prevailing conditions,” Banxico, as the central bank is known, said in the statement accompanying the decision.

“Mexico’s monetary policy makers at their September meeting reaffirmed their commitment to hike interest rates until they see upward pressure on inflation and inflation expectations abate. We see the central bank raising rates to 10.5% by year-end, in lockstep with the Federal Reserve, and holding there through the third quarter of 2023.”

Annual inflation in Latin America’s second-largest economy accelerated to 8.8% in early September, the fastest pace in more that two decades, led by soaring food prices. Core inflation, which includes volatile items such as fuel, has been a sign that the current price increases could be more prolonged.

“The most important change was the projected inflation path,” said Gabriel Casillas, the head of Latin America Economics at Barclays Plc. “All in all, this is consistent with our view that this is not a good time to start to send signal of decoupling from the Fed.”

Other economists suggested that the revision was overdue. The bank forecast in its statement that core inflation would be at 8.2% in the fourth quarter of 2022, an upward revision from the prior estimate of 7.6%. By end-2023, it would reach 4.1%, up from the past 3.2% prediction.

Banxico targets inflation at 3%, plus or minus one percentage point.

“They’re finally starting to recognize the various inflation pressures that have accumulated,” said Jessica Roldan, chief economist at Casa de Bolsa Finamex. “Banxico took it’s time in raising its inflation statistics, but it’s beginning to do so. Before, they were extremely optimistic.”

Since a weaker peso would stoke inflation, Mexico won’t have much choice but to follow US rates higher over the coming months, said Valeria Moy, director of the Mexican Institute for Competitiveness, ahead of the decision.

With Thursday’s hike, Mexican borrowing costs are at the highest since the central bank began inflation-targeting in 2008.

The government of President Andres Manuel Lopez Obrador has tried to curb consumer price rises with a federal fuel subsidy and agreements with producers to keep prices down on a basket of basic goods. It singled out the makers of cornflour for driving up the prices of tortillas.

Finance Minister Rogelio Ramirez de la O promised lawmakers in Congress an expansion of anti-inflation measures in the coming weeks, without specifying exactly what those measures would include.

The tighter monetary policy is threatening to stunt the economy’s weak recovery, triggering criticism from Lopez Obrador, who has in the past likened it to shutting off a car engine.

Read More: Inflation Upends Politics in the Most Unequal Region on Earth