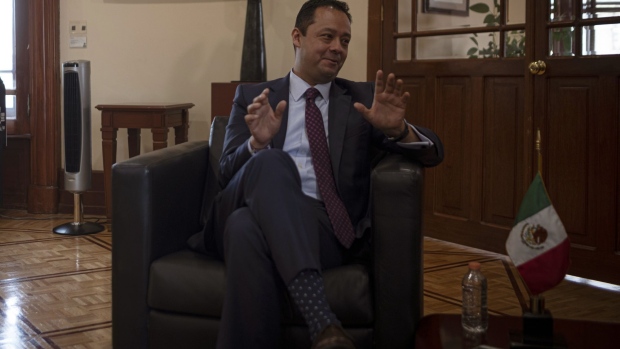 Gerardo Esquivel, economic advisor for the presidential campaign of Andres Manuel Lopez (ALMO), speaks during the Bloomberg FX18 Summit in Mexico City, Mexico, on Wednesday, March 14, 2018. The summit brings together the most important participants in the Mexican financial market to discuss the unprecedented challenges that propose to cause volatility in the economic, political, and financial sectors of the country. , Bloomberg

(Bloomberg) -- Mexican President Andres Manuel Lopez Obrador is likely to name an outsider to fill a central bank board seat that becomes available at the end of the year, according to analysts who closely follow Banxico, as the bank is known.

Lopez Obrador on Monday signaled that Deputy Governor Gerardo Esquivel, whose term ends Dec. 31, may not be reappointed to the job after losing an election to head a Washington-based development bank. That triggered speculation among Banxico-watchers on possible names to fill his place on the five-seat board, with experts giving outsiders rather than someone who already works at the bank a bigger chance of getting the job.

“We’ve seen that nominations throughout this administration haven’t followed what was a tradition -- that the board had members who had spent their career inside the central bank,” said Janneth Quiroz Zamora, vice president of economic research at Monex Casa de Bolsa.

These include his naming last year of ex-Finance Ministry spending chief Victoria Rodriguez as the bank’s governor, despite her limited monetary policy experience.

Esquivel may still end up surprising Banxico watchers by being renominated for a second eight-year term, which would likely see him continue his support for looser monetary policy than other members of the board.

These are some of the candidates economists think might replace Esquivel:

The second-in-command to Finance Minister Rogelio Ramirez de la O, Yorio has been part of the team that kept the deficit in check amid spending on big-ticket items such as a new airport and a refinery.

As deputy minister, he attends central bank board meetings in a non-voting capacity and is the public voice of the government on issues ranging from the oil hedge to a pact to limit inflation.

The vice president for regulatory policy at the CNBV, Mexico’s financial watchdog, Buenrostro has a doctorate in economics from Warwick University in the UK. She worked in the private sector at Commerzbank AG, and held senior roles in Lopez Obrador’s Welfare Bank and at the country’s health regulator. Her sister, Raquel, is a close ally of Lopez Obrador’s and was recently named economy minister.

“I don’t think that she’s had experience in a field related to the Banco de Mexico, but that’s not a restriction by law,” said Joel Virgen Rojano, director for Latin America strategy at TD Securities.

The Finance Ministry’s undersecretary of expenditure has the same job that Rodriguez had before she was tapped for Banxico’s top role. He previously served as the director of two development banks, and served at the tax authority. He was also part of Lopez Obrador’s transition team.

Some point out that he has less experience than Yorio and is less well-known in financial markets, but his work in the Finance Ministry still makes him a competitive player for the job. Others think the president would be unlikely to allow him to leave his current role.

“It’s hard to imagine the government would let its deputy secretaries go, because they work well with the team,” said Gabriel Casillas, head of Latin America economics at Barclays Plc, of De Botton and of Deputy Finance Minister Gabriel Yorio.

The Harvard-educated director of the National Works and Public Services Bank, known as Banobras, Mendoza is one of the few senior public officials who works with Lopez Obrador after previously serving in the administration of former President Enrique Pena Nieto.

Before being posted to Banobras when Lopez Obrador took power in 2018, Mendoza was corporate finance director at Mexico’s state utility and had senior roles in public credit and international affairs at the Finance Ministry.

Mendoza worked on M&A for Barclays Capital in New York and in investment banking for Credit Suisse Group AG before joining the public sector. He has an MBA from Harvard University and a finance degree from University of Texas, Austin.

The former head of Mexico’s statistics institute is also a central bank insider, having worked on its economic research team.

He has also worked on macroeconomic policy at the Finance Ministry, as well as at the International Monetary Fund. He has a doctorate from the University of California, Los Angeles.

Santaella and Edgar Amador, who are technical advisers to Banxico’s governor, “both have broad experience in monetary and fiscal policy,” wrote Gabriel Lozano, chief Mexico economist at JPMorgan Chase & Co., in a note this month.