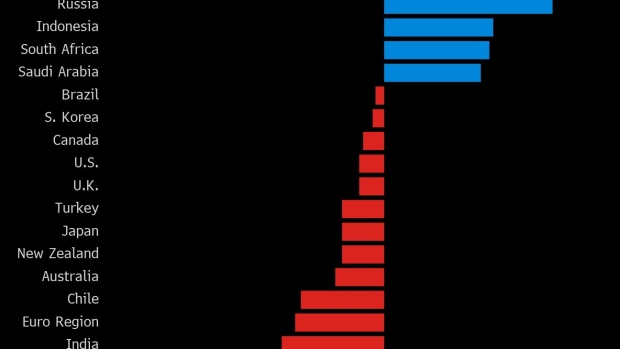 “I’m not the only one saying it. It’s something that’s said by the Western Hemisphere director of the International Monetary Fund,” Herrera said in an interview at the National Palace in Mexico City on Monday. “If you look at analysts, they’re also discounting something like this.”

Banco de Mexico has been lowering its policy rate since August as declining oil output and uncertainty over President Andres Manuel Lopez Obrador’s policies stalled the economy. Even after reducing the key rate by 1.25 percentage point since August, Mexico has one of the highest inflation-adjusted interest rates in the world.

Analysts expect the bank, which has operative independence from the government, to cut borrowing costs by another half percentage point in the rest of 2020, ending the year at 6.5%. Investors have reduced Mexico’s 2020 growth estimates to 1% from 1.7% six months ago after preliminary data showed the economy contracted last year.

Inflation ended 2019 at 2.83%, the second-lowest December rate since the turn of the century. It’s rebounded slightly to 3.24%, but is still within the central bank’s target range of 3%, plus or minus one percentage point.

The strength of the Mexican peso, which on Monday reached its highest intra-day level in almost a year and a half, is explained by factors including the government’s fiscal responsibility and the nation’s relatively high interest rates, Herrera said.

He also reiterated the government’s commitment to a “stable and flexible” currency.

“It’s very risky for somebody to start playing with the exchange rate policy,” he said. “It’s cost Mexico a lot of work to understand this and we’re very respectful.”

To contact the editors responsible for this story: Daniel Cancel at dcancel@bloomberg.net, ;Juan Pablo Spinetto at jspinetto@bloomberg.net, Matthew Bristow