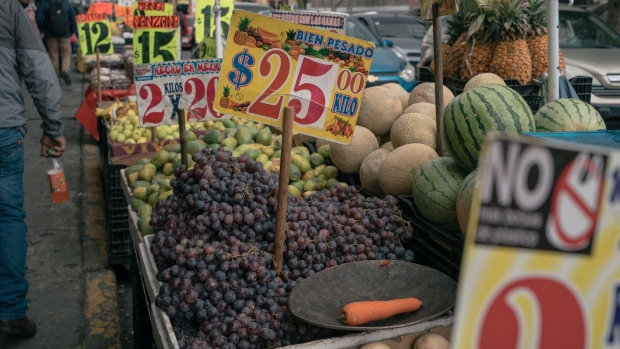 Fruits and vegetables for sale at a street market in Toluca, Mexico state, Mexico, on Tuesday, Aug. 9, 2022. Soaring prices of food and fuel across Latin America are hitting the poor the hardest, creating a political tinderbox that’s a warning to the world. Photographer: Luis Antonio Rojas/Bloomberg , Bloomberg

(Bloomberg) -- Mexico’s agreement with large companies to lower prices on key foods in exchange for waiving health inspections and other regulatory costs still leaves firms with the task of carrying out their own rigorous checks, a Finance Ministry official said.

Finance Minister Rogelio Ramirez de la O announced Monday that Mexico agreed to halt customs checks and import tariffs for 24 key goods at 15 top firms in order to bring their prices down 8% from their average peak. The country will also halt exports of white corn, beans and other goods in efforts to tame soaring inflation.

The companies that signed the pact include major supermarkets like Wal-Mart de Mexico SAB and food producers such as Gruma SAB de CV and Industrias Bachoco SA. But some Mexican columnists raised concerns about suspending health inspections, saying those checks mitigate the risk of disease.

Roberto Lazzeri, the finance minister’s chief of staff, told Bloomberg News that the companies in the price agreement have long track records of carrying out their own highly effective inspections. “They are mirroring every verification,” he said. “We are relying on them for their responsibility.”

Latin America’s second-largest economy saw inflation soar to a 22-year high of 8.7% in August, even as some regional peers including Brazil have begun to see price increases slow.